Beyoncé channels Marilyn Monroe as the cover girl for May’s issue of Out magazine, where the singer discussed her sexuality. 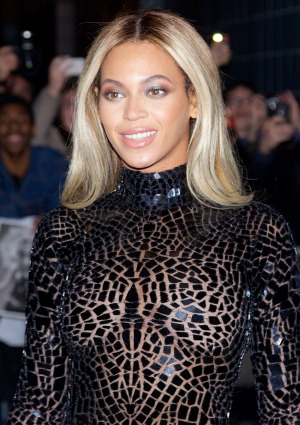 Beyoncé shocked everyone when she took her sexuality to a new level with her much talked-about self-titled album, and it looks like there’s nothing stopping her from expressing that liberation.

As the cover girl for the May issue of Out magazine’s Power issue, the pop titan channels her inner Marilyn Monroe with a platinum blonde wig and loses her top. This marks her first magazine cover since dropping the surprise project.

When discussing the overt sexual theme of many of her new tracks, Queen Bey made it a point to stress the power that lies in demanding control of her sexual nature. “There is unbelievable power in ownership, and women should own their sexuality. There is a double standard when it comes to sexuality that still persists. Men are free and women are not. That is crazy,” she told the magazine, before emphasizing that the “old lessons of submissiveness” and “fragility” have turned females into victims.

Beyoncé is an industry veteran with a string of accolades under her belt and throughout the span of her career, she’s sure gathered a diverse group of fans, but there’s one person she was intent on making happy with this project. “I needed to free myself from the pressures and expectations of what I thought I should say or be, and just speak from the heart,” the singer said.

Even with her feminist attitude, Bey caught some heat since the dropping the LP for its borderline explicit nature and the little-known fact that out of the entire crew that helped assemble the album, only six of them are women.

Regardless of the controversy, the singer told Out magazine that she’s glad that the project inspired people who might feel like they’re an oppressed minority. “We are all the same and we all want the same things: the right to be happy, to be just who we want to be and to love who we want to love,” she said.