The world has lost an icon of the silent film era with the passing of Mickey Rooney at age 93, but acting wasn’t his only legacy. We take a look at the eight wives of the man most famous for playing the wholesome Andy Hardy. 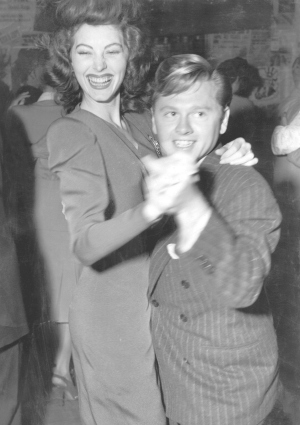 Rooney met Hollywood bombshell Ava Gardner when she was still just a starlet in 1941 on the first day on the set of Babes on Broadway. In his 1965 autobiography, Rooney revealed, “I don’t know exactly how many times I proposed. I stopped counting after twenty-five. I asked in as many ways as I knew.”

Gardner, who was only 19 at the time, quickly grew tired of Rooney’s wandering eye, observing, “He went through the ladies like a hot knife through fudge.” She later divulged how much of “a risk” it was for her career leaving Rooney on account of his notorious adultery, but, knowing he would never change his ways, Gardner decided that “citing ‘incompatibility’ was the cleanest and fastest route out of the marriage.” 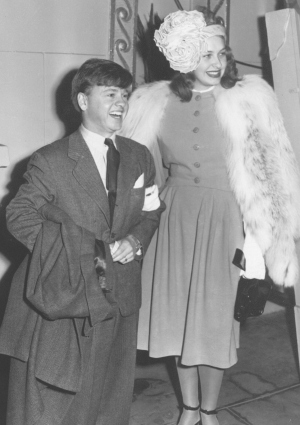 In 1944, while Rooney was in the military and stationed in Alabama, he met local beauty queen and aspiring singer, Betty Jane Rase (also known as Betty Jane Baker). After a whirlwind romance and a mere seven-day engagement, Rooney wed the 17-year-old Miss Alabama.

By all accounts, the four-year marriage — which resulted in two children, Mickey Rooney Jr. and Tim Rooney — was far from blissful. In Life Is Too Short, Rooney confessed that he treated the marriage with the “old-fashioned, male chauvinist pig solution: I kept Betty Jane home, barefoot and pregnant, literally.”

In 1947, only a month after the birth of their second son, Betty Jane announced her intention to divorce Rooney, citing “mental cruelty.” 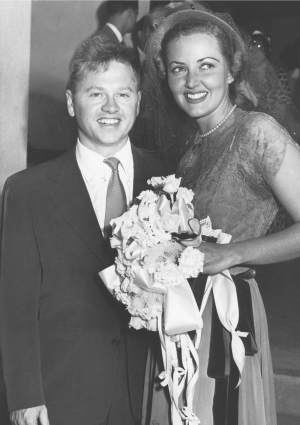 Although he told the El Paso Herald-Post the year the two married, “I’ve got me a wonderful girl; if I don’t make this one last, there’s something wrong with me,” he changed his tune in later years. “She [Martha] drank too much, and we couldn’t go on,” Rooney was quoted saying in People Weekly in 1993.

Vickers divorced Rooney in September of 1951 on the basis of “extreme cruelty.” The couple had one child together, Theodore Michael Rooney. 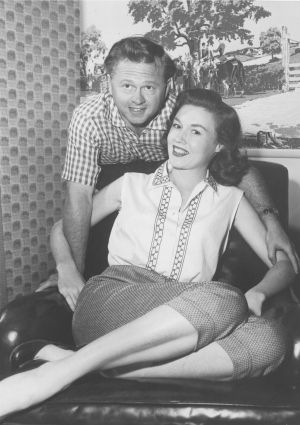 A year after Rooney and Vickers divorced, the lothario landed a fourth wife in Elaine Devry. An actress who starred in feature films like The Atomic Kid and appeared on popular television series such as Bonanza and I Dream of Jeannie, Devry met Rooney at a Woodland Hills driving range in the fall of 1952 and married him in November of the same year in Las Vegas.

Their relationship was rocky at best. “Living with Mickey is no bed of roses,” Devry reportedly said of Rooney. “Six wives can’t be all wrong.” The two separated in 1957, among allegations of Rooney’s rumored gambling addiction and adulterous extracurriculars. Their divorce was finalized the following year. 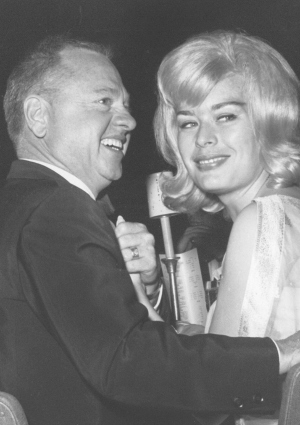 After his fourth failed marriage, Rooney was introduced to Barbara Ann Thomason at a nightclub. An actress who went by the stage name Carolyn Mitchell, she secretly eloped to Mexico with Rooney at the end of 1958. The couple married publicly in May the following year, only a few hours after his previous marriage officially ended — although, Rooney said they received “permission” from his ex.

During their marriage, Rooney and Mitchell had four children: Kelly Ann, Kerry, Michael Joseph and Kimmy Sue Rooney. However, marital discontent pointed both parties in the direction of divorce lawyers about six years into their union. Although they briefly reconciled, Rooney ultimately filed for divorce in 1966, citing mental cruelty and naming Mitchell’s alleged lover, Milos Milos, as a correspondent.

Sadly, Milos killed Mitchell in a murder-suicide in Los Angeles in 1966. She was only 29 years old. 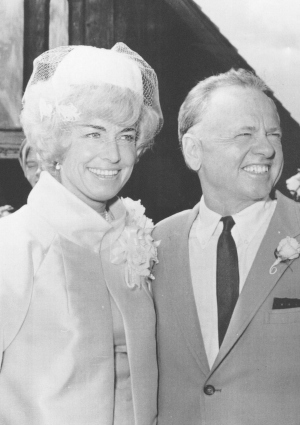 Supposedly still grieving over the senseless death of his former spouse, Rooney found comfort in Mitchell’s dear friend, Marge Lane, whom he’d known for nearly a decade. The two headed to Vegas for a quickie wedding, which, after only 100 days, turned into a quickie divorce. 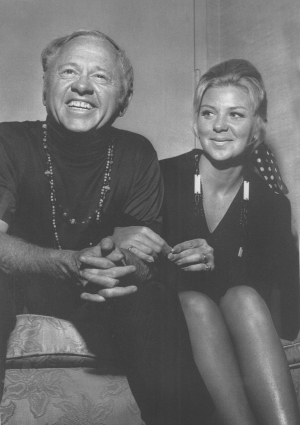 Continuing Rooney’s departure from women in film, the actor married Carolyn Hockett in 1969 — a secretary, the single mother was 23 years younger than Rooney. During their marriage, Rooney adopted Hockett’s son, Jimmy, and the couple had one daughter, Jonelle. In 1975, Hockett filed for divorce on the basis of financial instability. 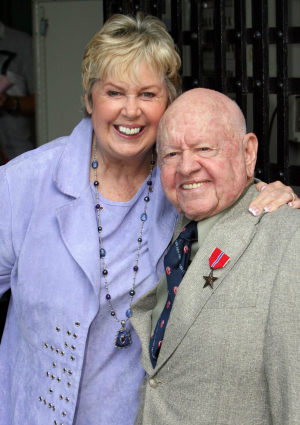 In 1974, Rooney met his eighth wife, Jan Chamberlin, at a party she attended with — wait for it — his son, Michael. Although he was still married to Hockett at the time, Rooney pursued Chamberlin after his divorce. Like Hockett, Chamberlin was much younger than Rooney, an impressive 18 years his junior. A singer and music teacher, Chamberlin lasted longer as Rooney’s wife than all of the actor’s previous spouses combined.

The couple separated in May of 2013 following several tumultuous years caused by Rooney’s allegations of elder abuse at the hands of Chamberlin’s son, Christopher Aber. In the wake of Rooney’s passing, Chamberlin revealed she hadn’t seen her husband in nearly a year and had only learned of his death from the internet.