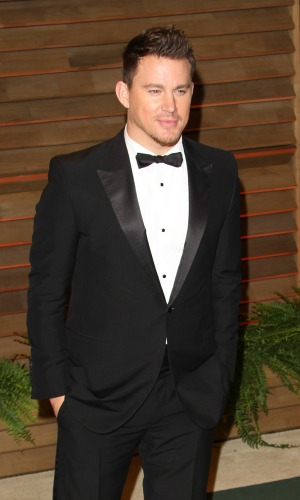 Channing Tatum will be the first-ever male recipient of the MTV Trailblazer Award and who’s going to argue with that pick? The guy dances, he’s funny, he’s a dramatic actor and he… strips. According to MTV, Tatum is the natural choice for the award because of his proven “ability to play everything from a talented dancer from the wrong side of the tracks, to a hero capable of saving the world from imminent danger.”

Here are the top five reasons we think Channing Tatum is totally deserving of the Trailblazer title.

Everyone, I mean everyone, loves Rachel McAdams, but why do you think people were clamoring to see The Vow? And McAdams’ Mean Girls co-star, Amanda Seyfried, is no hack herself, but she’s certainly not the reason we purchased tickets to Dear John. We watched for Tatum. Have you looked into those blue eyes? It’s like the first time you listened to the Beatles.

There are few actors on the planet who are able to successfully prance between both chick-flick and man-movie territory. Tatum has proven that he’s able to do just that. He was hilarious as Jenko in 2012’s 21 Jump Street and he kicked butt in the action blockbuster, White House Down. Girls want to be with him; guys want to be him.

Tatum is super protective of his young family. He admitted that he was a crying mess in the delivery room when his wife was giving birth to their first child. “It’s like someone’s hurting, someone that you love and you can’t do anything about it,” he said. He refuses to sell photos of his daughter, because he doesn’t want to make a profit off his child. And, just recently, he posted a tweet about kindness, quoting the Dalai Lama.

He doesn’t take himself too seriously

Tatum seems like a real person and he is not pretentious in any way. Despite his looks, the man can truly make fun of himself and he knows how to have a good time. Remember his game of “sticky balls” with Jimmy Fallon? And then there’s the little gem of a video on the set of 21 Jump Street.

Mila Kunis, who co-stars with Tatum in the upcoming Jupiter Ascending, will present the award to Tatum at the 2014 MTV Movie Awards on April 13.