Less than a month after her wedding to James Watson, Jamie Lynn Spears attended the 2014 ACM Awards, stunned on the red carpet and kept mum on the Britney Spears dis that occurred during the show’s opening monologue. 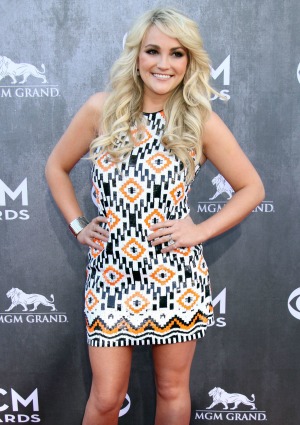 Jamie Lynn Spears is the baby sister of one of the world’s most famous women, but that doesn’t mean she can’t have a little shine of her own every once in a while. On Sunday, April 6, the newly married singer attended the 2014 Academy of Country Music Awards and dazzled on the red carpet with her husband James Watson by her side.

Dressed in an Aztec-like patterned minidress, Spears was all smiles with her husband as she flashed her wedding ring. Even though she released her debut single “How Could I Want More” late last year, the blond beauty didn’t have any singing duties for the night and appeared simply as a guest attendee for the ceremony. Talk about an exciting mommy night off.

Shortly into the evening, co-host Blake Shelton hit the stage and actually took a low shot at someone pretty dear to Jamie Lynn: big sister Britney. When his co-host Luke Bryan stressed that everyone at the show was ready for some live music, The Voice judge said: “And if you don’t like live music, you can go see Britney Spears down the street.” Not exactly the most respectful thing to say when a sibling is in the audience, Blake.

Regardless of the joke, Spears took to Twitter after the show, gushing about her experience, and even showing some love to fellow country songstress Kellie Pickler.

Just last month, the 22-year-old starlet made headlines when she tied the knot with James Watson in a New Orleans evening ceremony. As expected, it was a private family affair that included her 5-year-old daughter Maddie Briann, mother Lynn, father Jamie and, of course, big sister Britney.

46 mins ago
by Danielle Sinay