Julianne Hough is returning to Dancing With the Stars to join the judges’ panel once more. 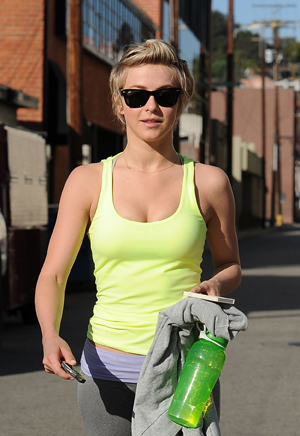 Julianne Hough is coming back to Dancing With the Stars again to join the judges’ panel on Monday night.

The professional dancer-turned-actress will sit with Len Goodman, Carrie Ann Inaba and Bruno Tonioli at the judges’ panel, once more returning to the show that made her a star, People magazine reported.

“I’m very excited. It’s my home away from home,” Hough said. “This season everybody is so great. We’re in the fourth week and everybody is really intriguing.”

While being a judge is very different than actually dancing on the popular dance competition, the two-time DWTS winner admitted that she is just as nervous critiquing as she was competing. “You go in trying to give constructive criticism, but when the nerves get to you, you sometimes put your foot in your mouth, which I have done in the past.” Hough went on. “So, this is my do-over.”

Hough famously hit a nerve when she judged fellow dancer Mark Ballas and then-partner Christina Milian last season. She told Milian to watch out for Ballas, who can sometimes take over the spotlight. Hough meant the comment as a joke to tease Ballas for always being a showman, but he was not too pleased with Hough’s remarks.

“I don’t really get surprised by the judges’ comments,” Ballas told the press after the show. “The one comment that was a little funny was that I make [the dance] all about me — but all the critiques were at me, not Christina.”

The Safe Haven star later addressed her critique, admitting she may have been a bit too direct.

“I didn’t mean for it to come out harsh,” Hough said. “I could have probably said it a little differently.” She also added that Ballas has been a pal since the two were kids and later that evening they even went to dinner together. “That’s what’s so hilarious about it.”

Additionally, Hough recently reiterated how hard it is to be on the competitor’s side of the floor and can definitely sympathize with all the dancers.

“I’ve been on that floor and I know how it feels,” Hough added. “The adrenaline… rush and all the hard work that’s put into it throughout the week.”