The Duke and Duchess of Cambridge have arrived in New Zealand where Prince George is experiencing his first royal trip abroad — and his wardrobe is on point with his fashionable mum’s! 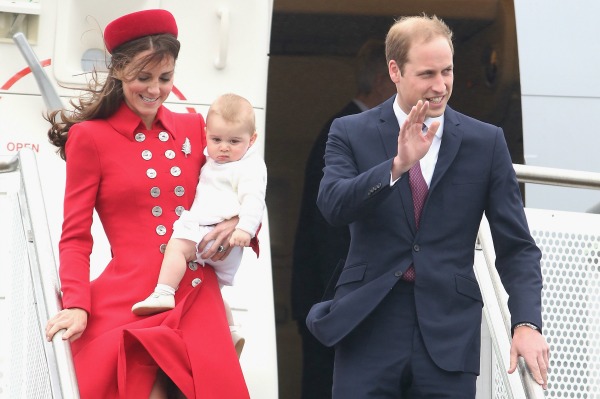 The former Kate Middleton was regal in red as she stepped off a plane in New Zealand with her husband, Prince William and their young son, 8-month-old Prince George, for a three-week tour down under. 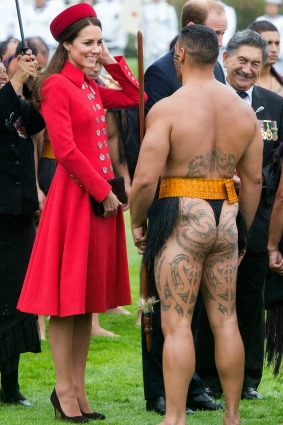 Not one to let a 30-hour flight — or the unfavorable weather — dampen her style, Kate did not disappoint in a cheery red coat with a double row of mother-of-pearl buttons by designer Catherine Walker and a matching pillbox hat by Gina Foster, beautifully setting off a diamond and platinum silver fern brooch given to Queen Elizabeth by a committee of New Zealand women’s organizations in 1953.

Prince George, third in line to the throne, looked absolutely adorable in a suitably formal shorts and shirt set, and he kept cozy and warm in the rainy weather in a cream cardigan with a toy soldier knit into one side.

The family and their 11-person entourage arrived in Wellington and were greeted by traditional Maori warriors with nearly bare tattooed bottoms at the Government House and literally rubbed noses with a local dignitary in a tradition known as a Hongi.

Kate Middleton is dripping in diamonds at Portrait Gala >>

Prince George is scheduled to make no less than six personal appearances during the family’s three-week tour of New Zealand and Australia, with Kate thrilling fashionistas with about 32 different outfits.

The royal baby is a month younger than his father was when Prince William went on his own first regal tour of the same two countries at just 9 months old, bucking palace tradition to leave babies behind while the parents upheld their royal duties.