Don Draper is back for a final (split) season of Mad Men… but will he be up to his same shenanigans? We hope so. 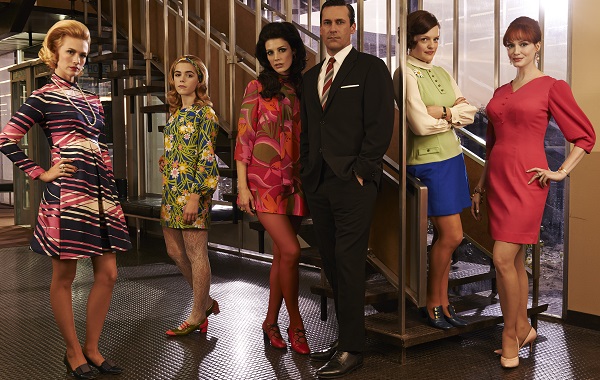 Things don’t look good for Don and Megan in Mad Men Season 7. We know from Season 6’s hallucinations that all Don wants from his wife is to see her barefoot and pregnant. Sadly for him, Megan has other plans. In the premiere episode, we finally saw Don turn down a woman in a possible attempt to be a better husband. How long can he hold out, though? We’re certain it’s only a matter of time before Don finds his way into a strange new bed. Here are seven ladies we’d like to see get lucky (or at least as lucky as you can get sleeping with Draper).

Remember that time Don and Joan ended up at a bar together? The two cynics hit it off so perfectly. One of Don’s biggest problem with Megan is that she wants a life outside of their marriage. We wonder if it wouldn’t be different if it was Joan and her life outside marriage wasn’t still with him on a day-to-day basis. Of course, he’d need to be able to get over the fact that Red slept with Roger Sterling, first.

Don recently fell back into bed with his ex-wife once — what’s to say he won’t do it again? He’s had his fun with a young, gorgeous, independent actress like Megan. Perhaps now he’s ready to come back to what he started out with. Their two levels of crazy really do blend well together. Plus, it might be the only way Don can redeem himself with Sally (and we already know he likes married women).

Season 7 opened with Peggy’s life in shambles, even more so than when Pete knocked her up. Don and Peggy have bounced off each other for years now and they’ve both loved and despised one another. When Peggy has needed his approval in the work environment, Don has told her to man up. Will that change if she needs him on a more personal level?

Elisabeth Moss chats about her most awkward on-screen kiss >>

With Don spending more time in California, it’s only a matter of time before he bumps into Anna’s niece. You may remember that when Don tried to flirt with Stephanie during his visit with Anna in California, Stephanie let him in on her aunt’s struggle with cancer. There was no way for them to overcome the emotional turmoil at that time. Now that Don has had some time and distance, perhaps the pretty young blonde is exactly what he needs/wants. Wouldn’t it be insane if they somehow ended up in Anna’s old house? That seems perfectly screwed up enough for Mad Men.

There’s so much to despise about Trudy. She was beyond obnoxious when we first met her. Over time and as she dealt with more and more of Pete’s crap, Trudy grew stronger. She’s not entirely to Don’s taste: She’s no longer married and not quite young enough. But, he might enjoy a round or two with her just to stick it to Pete. Boy, would we like to see Pete Campbell’s face if he walked in and caught them.

Rachel, head of Menken’s department store, and Don spent their fair share of time working together. Rachel’s pull toward Don was strong, but she had no interest in being the scapegoat for his desires to run away and, ultimately, they broke it off. She’s married now, but for how long? One more tryst together is exactly what Don and Rachel need.

Midge was the first other woman of Don’s that we met. A bohemian, artist and eventual drug addict, she knew exactly where she stood in Don’s life and was fine with it. Assuming she’s still alive, we’d love to see Don scoop her up and give her a new lease on life, much as the real Don Draper’s death did for Dick Whitman. Bonus for Don: If they end up together and he ends up cheating, again, Midge is the least likely to be upset by his womanizing ways.

Of all Don’s ladies, who do you most want to see return during the final season of Mad Men? Tell us below.

Need more TV news and reviews? Sign up for our newsletter >>