As the world still tries to imagine late-night TV without David Letterman, CBS is moving on to the possibility of Stephen Colbert slipping on the gargantuan pair of shoes. 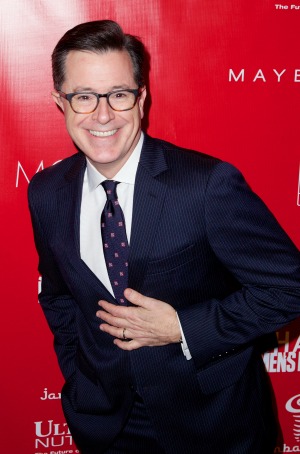 Sources from the camp of both CBS and Stephen Colbert are saying that the Colbert Report host is the numero uno choice to be the next Late Show host, and the comedian is ready to dazzle in the spot, according to Mashable.

David Letterman made his retirement announcement to a live audience just yesterday, giving the reason he is turning 67 soon and would like to spend more time with his family. He will end his 22-year run on The Late Show sometime in 2015.

Colbert seems like a natural choice to anchor the show. He has a huge following and he’s comfortable handling interviews. Oh, and let’s not leave out the fact that he is hilarious.

Entertaining the thought of Colbert as a mainstream late-night host is not without controversy for CBS, of course. The question of whether Colbert can — or will — leave behind his faux-conservative persona to interview more run-of-the-mill non-political celebs is a concern, as well as Colbert’s salary requirements.

It’s also hard to imagine that the recent Colbert Twitter storm isn’t in the back of one or two CBS execs’ minds. Last week #CancelColbert went viral when an out-of-context tweet was sent from the show’s offical account. Colbert was accused of being racist, and some were calling for Comedy Central to pull the plug on the show altogether.

“The interweb tried to swallow me whole, but I am proud to say that I got lodged in its throat and it hacked me back up like a hastily chewed chicken wing. I’m still here,” said Colbert on his show in response to the cancellation campaign.

For now, CBS is remaining tight-lipped regarding the Colbert rumor. “We’re not commenting on any rumors or speculation about succession,” a spokesperson for the network said.

Regardless if Colbert will be Letterman‘s successor or not, the changing of the guard will go down much differently for The Late Show with David Letterman than The Tonight Show with Jay Leno. In 2013, NBC forced Leno into retirement when it allowed his contract to expire and announced Jimmy Fallon as his replacement.