More than a decade since the legendary Johnny Cash passed away, his son and label are still uncovering and releasing new tracks. The contents of Out Among the Stars might be his best posthumous album yet. 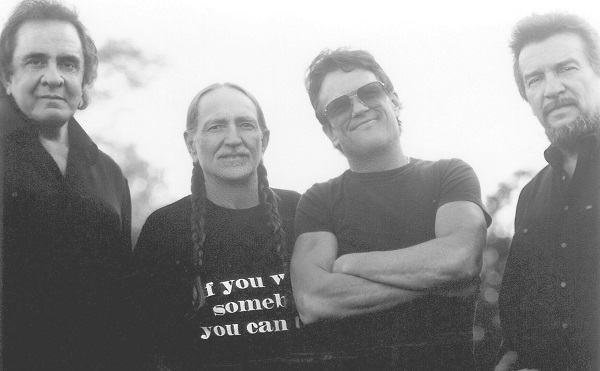 There is no one — rock head, redneck or otherwise — who doesn’t love Johnny Cash. When the man in black passed away in 2003 at the age of 71, an entire nation mourned. Throughout his life, he took on so many roles. From a grinning and drug-addled bad boy to a stern and steady Christian man, Cash grew and transformed in the same way our nation did throughout his seven decades of walking the earth.

Rosanne Cash “A Feather is Not a Bird” review >>

There were high points and low times, but Cash always came out on top… except perhaps during the ’80s, when Out Among the Stars was recorded and subsequently “lost.” It was during that era that Cash tried numerous times to restore his hold on the country and was dropped twice from record labels. It was a dark time for the man in black, though perhaps not the darkest. By the time the ’90s and Rick Rubin rolled around, Cash was a “legend” but not a chart-topper. That changed with the help of Rubin, Cash’s 2002 cover of Nine Inch Nails’ “Hurt” and his death.

It’s sad how life works sometimes. A whole new generation discovered Cash in all his glory just as he faded from earth. After his passing, fans were gifted with two more acoustic albums, American V and American VI. They were decent albums, but in terms of Cash’s long and prestigious career, the tracks often seemed like what was found at the bottom of the barrel or the back of the storage closet.

Enter Out Among the Stars. Dubbed a “lost” album from the ’80s, it gave many critics their doubts. Lost albums are often lost for a reason… they’re no good. And everyone knows this was a rough time for Cash. At one point during the ’80s, he wrote a song parodying himself (“Chicken in Black”) in an intentional effort to annoy his label and be let go. The songs from this album came from those same recording sessions, and yet there’s nothing here that Cash should ever be ashamed of.

The album opener and title track starts in pure Cash fashion. The song opens with “It’s midnight at a liquor store in Texas.” So begins the story of a young man down on his luck, a sort of Bonnie-and-Clyde story without the gal. The chorus rings of his grasp on Christianity by calling humans “travelers” and referring to them being weary and shouldering their “burdens.” It’s easy to see why a track like “Out Among the Stars” may not have fared well in the ’80s but is doing so well during such a nostalgic period in American music.

“If I Told You Who It Was” reads like the exact opposite, though still very much in Cash’s wheelhouse. The song follows Cash during a visit to Nashville, where he runs into another famous country singer, helps her change her tire and ends up in her hotel room. Gasp! What would June Carter think? The chorus is easy, catchy and boisterous: “She told me it was our little secret and anyway you wouldn’t believe it if I told you who it was.” The joke (we hope) comes with a clip of Minnie Pearl yelling “Hoooooowdee!” as she was known to do.

Every track on the new album is great, but “Call Your Mother” is especially lovable as Cash’s alternative to a breakup song. Instead of mourning the loss of the girl who no longer loves him, Cash seems more concerned with losing out on her family. He reminisces of time spent with her family and gently reminds her to call her mother, tell her they broke up and give his regards to her dad. Only Cash could be so cool about a breakup.

We want a love like Johnny and June: The strongest of celeb couples >>

The stand-out performance has to be “Don’t You Think It’s Come Our Time,” a duet with June Carter Cash. After growing up singing in the Carter Family band, June could harmonize with practically anyone. When she sang with Johnny, though, their voices mirrored each other and reflected sheer perfection. “Our Time” might become one of their best collaborations ever.

While we’ll forever miss our Folsom County Jail singer, if Out Among the Stars is the kind of “lost” album we have to look forward to in the future, Johnny Cash fans are looking at another life’s worth of spectacular new music by the man in black. Who could ask for a better parting gift?

To have music reviews, news and interviews delivered to your inbox, sign up for our newsletter >>