Way to celebrate a birthday, Austin Mahone. First, studio time with Justin Bieber. Then, an album and tour announcement. 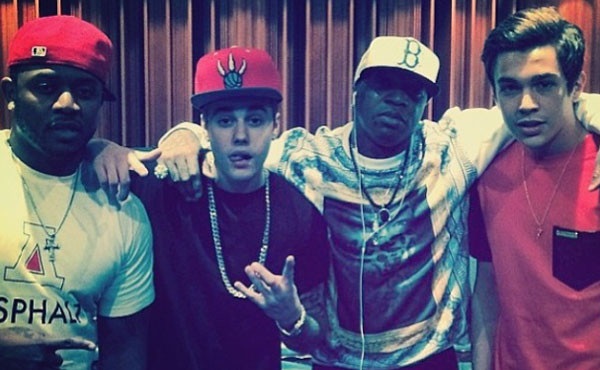 Selena, Shmelena. The gossip hounds have been in full roar over a reported rift in the friend status of Justin Bieber and Austin Mahone. Apparently never having heard the term “bros before hos,” gossip columnists tend to believe the two pop stars had it in for each other after both dating Selena Gomez. That is clearly not the case, though. Need proof? Look no further than Bieber’s Instagram account where just yesterday he posted an in-studio picture alongside Mahone. Gasp!

Gomez says “So long” to Justin and “Well, hello there” to Austin >>

The photo has many wondering if we should expect a collaboration between the two buddies in the very near future. Like, maybe on Mahone’s upcoming release, The Secret? As awesome (and not entirely impossible) as that would be, Beliebers and Mahomies probably shouldn’t hold their collective breath just yet. Mahone’s people recently announced the May 27 release of The Secret and made no mention of a Bieber collaboration, though they were quick to share that Mahone’s single featuring Pitbull, “Mmm Yeah,” would appear on the seven-track (plus bonus songs) debut.

Considering the picture appeared yesterday and the album was announced today (on Mahone’s birthday), it seems unlikely the track could appear on the album. That’s cutting it a little close, even for our hi-tech society. Then again, the release didn’t announce a full track listing, no doubt to create some whispers. Perhaps the next announcement will feature Bieber’s name.

Fret not, though, Mahomies. While your boy’s press relations people are remaining tight-lipped about a Bieber collab, they shared some other exciting news. Are you ready to see Mahone in person? Starting in June, the singer will embark on a 26-city tour. Is he coming to a city near you?

If we hear any more about the collaboration, you can bet we’ll follow up. Until then, start saving your lunch money so you can buy a concert ticket.

Want more music news and interviews? Sign up for our newsletter >>