Snooki has finally confirmed the news that she and her fiancé are indeed expecting a new bundle of joy! 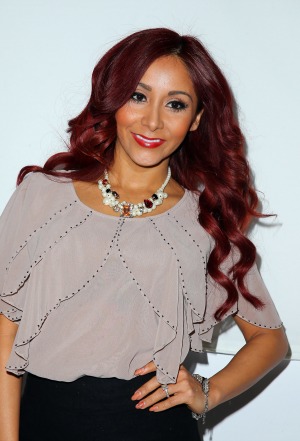 “Jionni and I are so excited to confirm that we are expecting our second child!” Snooki (whose real name is Nicole Polizzi) posted on her website. “Now knowing that our test results are good and our baby is healthy, we can finally talk about it!”

Snooki’s pregnancy was first rumored a few months ago, which means she is probably at least a few months along. She and fiancé Jionni LaValle are already parents to 19-month-old Lorenzo.

“I want to thank everyone for their congratulations and we can feel how excited you are for us!” she added. “We could not be happier! Big things are happening this year with the wedding, moving into our dream house and having our second bambino or bambina!”

Snooki and LaValle were engaged in March 2012, six months before Lorenzo’s birth, and the two have been planning a wedding since. She announced her pregnancy news, with a link to her website, on Twitter Friday morning.

The Jersey Shore star did confirm she didn’t just learn about her pregnancy, but she wanted to make sure they announced it when the time was right for them.

“Jionni and I are VERY happy together. He’s my best friend and I’m his,” she said. “Jionni and I wanted to clear the air by saying we only kept our second pregnancy to ourselves for the health of our child and until we reached a reasonable time to let the world know.”