It looks like Johnny Depp has really found the love of his life this time around. Once again, the star has gushed about his bride-to-be Amber Heard. 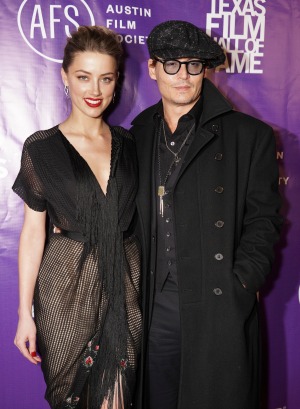 Johnny Depp appears to be happier than he has ever been, and the 50-year-old actor is only too happy to gush about his bride-to-be Amber Heard.

During an appearance on the Today show, the Lone Ranger actor confirmed his engagement for the second time. The once notoriously private star is no longer shy to tell the world why his new lady is the love of his life.

“She’s a wonderful girl,” the star told Today‘s Savannah Guthrie in a pre-taped interview that will air on Friday. “She’s sharp as a tack. A Southern belle and sweet as can be, and very good for me,” Depp gushed.

The happy couple sparked engagement speculation when the Paranoia actress was seen with a massive bauble on her ring finger at a Los Angeles, California, restaurant in January.

The engagement rumors have heated up since then, and Depp has even been spotted on numerous occasions wearing an engagement ring on his left finger, which he confirmed during a Monday press conference is his fiancée’s ring.

“The fact that I’m wearing a chick’s ring on my finger is probably a dead giveaway. Not very subtle,” he told reporters during the press conference for his latest movie Transcendence, in Beijing, China, on Monday, openly admitting for the first time that he is engaged.

And during his interview on Today, Depp was once again wearing his “chick’s ring.” Guthrie told the actor, “I think you look engaged.” And it was then that he lit up and snapped his fingers to accept the host’s congratulations.

The happy couple have been involved in a rather whirlwind romance since June 2012 after meeting on the set of the movie The Rum Diary, and not long after Depp called it quits with his longtime partner Vanessa Paradis.

Although Paradis and Depp spent 14 years together and share two children, they never tied the knot. So, in a way, the fact that Depp now wants to get married is quite a testament to his dedication to Heard.

The loved-up pair also recently celebrated their engagement party surrounded by close friends at the Carondelet House in LA on March 14. Among the guests was Depp’s good friend Steven Tyler, who couldn’t be happier for his friend. “I love that he’s in love,” Tyler told reporters outside the event. “We were all dancing and it was beautiful.”