Do you have questions about the new girl who appeared during the Vikings‘ episode titled “Unforgiven”? Of course, we know all about the pretty slave girl and Bjorn’s first on-screen crush, Porunn. 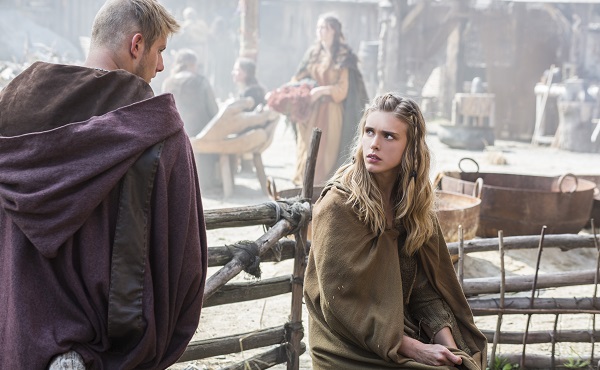 In the latest episode of History’s Vikings, a new female lead was introduced when Bjorn finally took notice of one of the Lothbrok family’s slaves, Porunn. From the minute they cross paths, their chemistry is palpable. They’re both so young and awkward, though, that neither of them knows how to handle things… not even Bjorn, who has become quite the Viking man and is supposed to be more self-assured. By the end of the episode, Porunn is invited to sleep in Bjorn’s room instead of in the stables. It’s clear they have very different ideas of what that arrangement means, but we’re not 100 percent in on what the outcome is.

INTERVIEW: Vikings explores polygamy and the “other woman” complex >>

Played by the gorgeous Gaia Weiss, Porunn is clearly being set up as a major player in the Viking drama and is a potential girlfriend for Bjorn. What can we expect from the new pairing throughout Season 2? SheKnows chatted with Weiss and pulled out all the information we possibly could.

First and foremost, we wanted to know where Porunn came from. We loved her, but for us (and seemingly for Bjorn), she came out of nowhere.

“Well, her parents have been captured in a raid, so she’s always been a slave or a servant,” Weiss explained. “Women [were] captured in raids… were kept as slaves or forcibly married to further Viking colonizing. So, she’s a slave to the Lothbrok family. She’s really complex and challenging. So, she’s always been part of the picture, kind of. But she’s introduced into the TV show when Bjorn starts to show interest in her.”

Bjorn is practically royalty, and Porunn is a slave. That seems like the equivalent of Prince Harry showing interest in a SheKnows writer, which would certainly cause controversy. Should we expect some drama as Bjorn and Porunn grow closer?

“It’s a taboo, so it takes everyone a long time,” Weiss admitted. “I think throughout Season 2 no one’s really sure about what’s happening. And the relationship between Bjorn and Porunn is quite secretive at first because it doesn’t happen right away. They’re kind of playing with each other, but not in the modern way, but sort of back and forth.”

EXCLUSIVE: Will Ragnar and Rollo battle it out for Lagertha? >>

Weiss explained their relationship further. It turns out that Porunn is a lot like every other girl in the world and severely misunderstands her own magnetic pull for boys. When you factor in Porunn’s status as a slave, it makes the situation all the more unbelievable for Porunn.

“Porunn didn’t really choose Bjorn. He started showing interest in her. She’s only known serfdom and brutality so she cannot believe that Bjorn is genuinely interested in her as a person,” Weiss said. “They go back and forth. It takes her a while to actually accept that he is interested in her, and she’s not scared, but she doesn’t trust him at first. She’s very suspicious of his interest.”

As much as we love the dirty sexy blood baths, we’re always down for a little romance. We can’t wait to see where this new coupling goes. Weiss shared that, unlike many television shows, things won’t be rushed, however. Fans should expect a slow, natural progression. In other words, we shouldn’t hold our breaths for a wedding during the Season 2 finale.

“I think things will evolve or be confirmed in Season 3, because throughout Season 2, they’re really back and forth,” Weiss said, adding, “It’s a true relationship.”

Want to see how Bjorn and Porunn’s relationship unfolds? Continue watching Vikings Season 2 on the History Channel on Thursdays at 10/9c.