The infamous “Now what?” question haunts all of us post-grads. Katherine Schwarzenegger’s new book explores inspiring celeb stories that will make you feel better about your answer, whatever it may be. 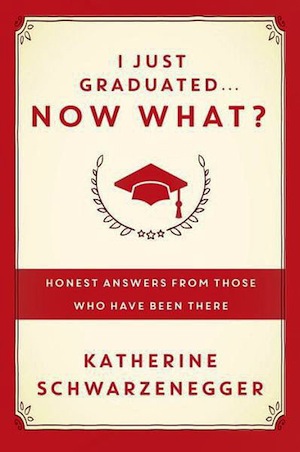 Just because you manage to graduate from college doesn’t mean you’ve got it all figured out, even if you go on to become a successful celebrity billionaire.

Katherine Schwarzenegger, the daughter of Arnold Schwarzenegger and Maria Shriver, didn’t let her post-grad confusion get her down. Instead, she used her family’s connections to reach out to her influential, high-powered friends for some much needed advice.

Katherine Schwarzenegger: ‘This is so inappropriate’ >>

The result was her second book titled I Just Graduated. . . Now What?: Honest Answers from Those Who Have Been There, which chronicles these celebs’ stories as well as her own.

“The book is all about advice for recent or not as recent college grads,” Schwarzenegger said during our interview. “I graduated from college almost two years ago from USC [University of Southern California] and had no idea what I wanted to do after college and had a lot of anxiety about it.”

“I blindly e-mailed a bunch of people to interview for this book,” Schwarzenegger continued. “Some said ‘no’ and some said ‘yes,’ which was awesome.”

The yeses include Eva Longoria, John Legend, Lauren Bush Lauren and Anderson Cooper. More than 30 influential and well-known names shared their story with Schwarzenegger. She compiled their journeys as well as her own and realized, “Everyone in this book had times of struggling and times of not knowing what was going to be next in their life and times of being unsure, and that’s exactly how I felt out of college. I was able to relate to everyone in that aspect.”

Schwarzenegger had a hard time picking one story as her favorite when we asked. “Every single person that I interviewed, I had a genuine interest in them and wanted to hear their story and also wanted to ask them questions that I just honestly wanted to know about since I just graduated and had a bunch of things on my mind.”

But she did say Sara Blakely — founder of Spanx — has a story that really resonated with her.

“She was one of my first interviews,” Schwarzenegger told us, “and after I heard her story, I was so surprised that she actually went to Disneyland and realized it wasn’t this fantasy and then went and sold fax machines door to door.”

Schwarzenegger explained that Blakely worked as a fax machine saleswoman for seven years, hearing “no” every single day. When she finally began shopping her prototype around for Spanx, hearing “no” didn’t discourage her because she’s heard it so many times before.

“The idea that Sara Blakely wouldn’t have been able to create Spanx had she not sold fax machines door to door is a really cool concept to think about,” Schwarzenegger said.

As for Schwarzenegger’s “Now what?” she is focusing on sharing her new book, but she also runs a lifestyle website katherineschwarzenegger.com and is exploring different projects in the TV world.

As of now, she doesn’t have any plans to write a third book. “I kind of just do it as subjects interest me,” she explained, “as I grow up and live my life.”

Katherine Schwarzenegger’s newest book I Just Graduated. . . Now What?: Honest Answers from Those Who Have Been There was just released last week and is available on Amazon.