Courteney Cox has taken a major step in her new relationship: She’s moved in with her boyfriend. 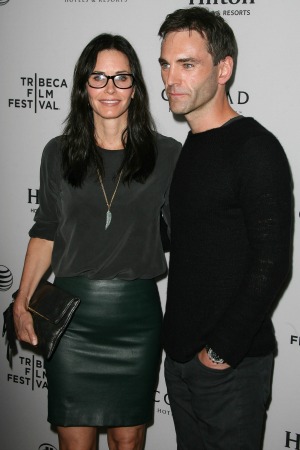 It’s only been 11 months since the ink dried on Courteney Cox and David Arquette’s divorce papers, but it sounds like the Cougar Town star isn’t wasting any time moving on to fresh meat.

According to the Mirror and a recent interview with close pal, Ed Sheeran, Cox’s current beau, Snow Patrol guitarist, Johnny McDaid, has moved into her Malibu beach pad and the two are quite close to tying the knot.

“I’m not sure that it’s public knowledge, so maybe I shouldn’t have said anything — but, yes, they’re already living together,” said Sheeran, who apparently introduced the two. “Things are moving fast. He moved in and, judging by the last time I saw them, they couldn’t be happier. They get on really well and are genuinely good friends, pardon the pun.”

McDaid, who is from Northern Ireland, is 12 years Cox‘s junior. Did we mention the name of her current show?

Let’s hope that McDaid is comfortable with a Bruce Willis-Demi Moore co-parenting style, because Cox’s famous ex is not totally out of the picture. The former Friends star has been public about the friendly relationship she and Arquette have been able to maintain and she is very proud of the modern family they have. Cox and Arquette have one child together, a daughter named Coco, and Cox is excited that Arquette is currently expecting a new baby with his girlfriend, Christina McLarty.

According to Sheeran, it looks like Cox and McDaid might be taking steps to make their situation more permanent.

“I wouldn’t be surprised (if they got married soon), but it’s still early days. They certainly enjoy each other’s company and feel very comfortable with each other,” said the British crooner.

Before Cox took up with her hunky rocker boyfriend, she was briefly linked to her TV ex-husband, Cougar Town co-star Brian Van Holt.