He’s never been afraid to show off his amazing body. David Beckham is giving us a tease of his new swimwear line with H&M. 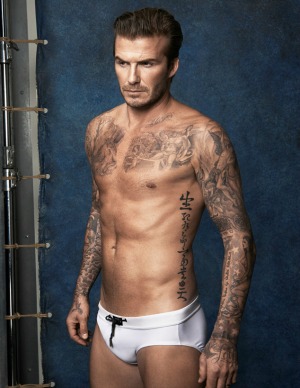 It’s going to be hard not to drool over these photos. On Thursday, H&M released some sizzling pictures of David Beckham‘s new campaign for the Swedish company.

Their lastest ads, shot by Glen Luchford, are for their new swimwear line. The former MLS player is wearing everything from snug briefs to playful board shorts. From the looks of the snapshots, he looks good in any style of swimwear.

David Beckham hailed as Underwear Model of the Century >>

Besides the clothing, the images released also showcase his buff bod with quite the bronze tan. Also on display are his multiple tattoos that fully cover his arms and upper pectoral area of his body. There is even an Asian character tattoo that is vertically inked down the left side of his body.

The line is an extension of his David Beckham Bodywear collection and it will be available beginning May 22.

Prince William and David Beckham team up to save the rhinos >>

In a press release on Thursday, the 38-year-old entrepreneur said, “The success of my Bodywear collection at H&M has been fantastic, so I’m thrilled to be introducing these great swimwear pieces ready for the summer. We’ve worked hard to create new classics for men, with great fit, comfort and also style.”

Beckham has also expanded his fashion line to include children’s clothing, which is perfect for his brood of four. His kids, with fashionista and wife, Victoria, range in age from 2 to 15 years old.