David Letterman has been on late-night TV for more than 30 years, and has decided it’s finally time to hang up his hat. 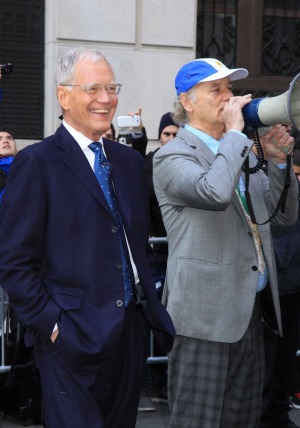 The old-school days of late night are officially coming to an end. David Letterman announced to an audience today that he will be retiring.

Letterman made his announcement during a taping of The Late Show with David Letterman, according to ABC News. He plans to retire in 2015, which will mean he will have been on the show for 22 years. He previously hosted NBC’s Late Night but moved over to CBS after being superseded by Jay Leno as Johnny Carson’s replacement on The Tonight Show.

The 66-year-old recently signed a contract that will keep him on CBS at least through 2015. Letterman began the late-night show in 1993 at the Ed Sullivan Theater in New York City. According to TMZ, he said the reason for the retirement is that he is turning 67 and wants to spend more time with his family — although he joked it was for another reason.

“Finally, Paul and I can get married,” Letterman teased.

Johnny Depp then came out as the guest and said many people backstage were crying.

Letterman started his career as a stand-up comedian in the 1970s and started in late-night TV in 1984 on NBC. His 22-year CBS run hasn’t had many interruptions, except for a bypass surgery back in 2000.

Letterman has been married to his wife Regina Lasko since 2009. The couple has a son, Henry, who they welcomed in 2003.

Celebs began tweeting their thoughts on the retirement.

CBS hasn’t yet announced a replacement for Letterman, but social media is full of ideas, including jokes about Jay Leno taking over the CBS show.

Tell us: Who would you like to take over for David Letterman when he retires next year?