He’s at it again. Find out what Justin Bieber did this time to get a scolding from a customer at Walmart. 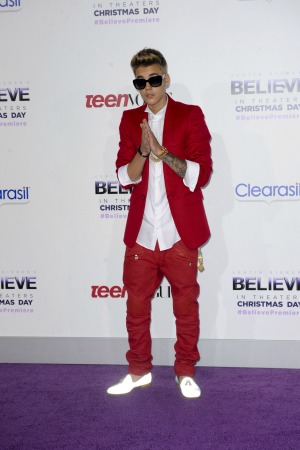 This news won’t surprise you: Justin Bieber was acting like a spoiled brat again. This time it happened in Stratford, Ontario, Canada, in a Walmart store.

The 20-year-old pop singer and his entourage of approximately “30 goons” began terrorizing patrons at the local discount store. According to The Daily Mail, customer Mike Malcho witnessed Bieber “shining flashlights” in little girls’ faces, “throwing things” around the store and having no regard for anyone’s well-being but his own.

Justin Bieber and Selena Gomez: Coming to a town near you >>

Malcho, who claimed to know some of the Bieber clan, ranted on his Facebook page about the alleged incident.

He wrote, “Justin shame on u…..ya know from get go I supported ur ass…Always saying he’s a kid…Money has got to him he will find his way back….on and on….U disgust me….Yes I am happy I told u exactly what I thought of u…u and ur 30 goons.

“I cannot believe they allow u to behave that way and r right beside u doing it….Waltz into Walmart last night and low and behold Mr Bieber not only being a little p**** to young girls by shining flash lights in there face etc…but walking through the store like u own the place with no regards to employees or others attending the store for real purpose bouncing balls ….throwing things… opening food etc….”

The concerned father even called out the store for not controlling the situation as well as the city for giving him the VIP treatment and escorting the “Boyfriend” singer directly to the front door.

He continued, “Shame on Walmart for allowing it to happen if I walked in with my 7-year-old son and he acted the way u did we would be asked to leave or escorted out…And I say 7-year-old loosely bc even he knows right from wrong and knows how to act in public…..Ur parents must really be proud???

“Walmart had next to no one there….and u take the city bus with a police escort but yet want no attention…and have the bus driver drop u off at Walmart doors bc u don’t want to get ur shoes dirty in the grass???”

While Malcho was clearly very upset by the situation, he offered the troubled star some solid advice.

He summed up, “Ur behavior doesn’t just effect u it effects all that live here….We want someone to be proud of and most of us thought we could be proud of u….What a disappointment.

“With that said Grow up son bc life is to short and ur a much better person then ur portraying to be…Alot of us know alot more then what’s published in the books and being posted and the movies being created…The only ppl u guys r fooling is r u….Give Stratford something to be proud of again…END of story.”

Malcho posted his rant on Tuesday evening and he received a lot of support from his friends regarding the incident. Bieber is currently spending time in Stratford to not only record new music, but to face assault charges stemming from a Dec. 30 event with a limo driver.

Another day, another Justin Bieber story.