Miley Cyrus broke down during a public sound check to mourn the unexpected death of her dog Floyd. 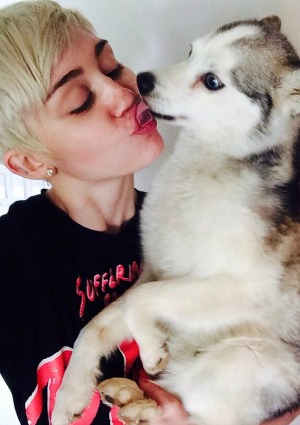 It’s been a tough week for Miley Cyrus. Just a day after revealing that her dog Floyd had passed away, the pop singer broke down in front of a sea of fans on Wednesday, April 2, to mourn the loss of the beloved pup.

During the Boston, Massachusetts, stop of her Bangerz world tour, the 21-year-old entertainer told the sound check crowd that she wasn’t feeling like herself because of the news and as much as she didn’t want to admit it, the Alaskan Klee Kai was always her favorite pet.

“I just want to do a song for him because we used to always listen to Fleetwood Mac together and it was his favorite song,” Miley tearfully explained before venturing into a cover of “Landslide.” Fortunately, her younger sister Noah Cyrus came to the rescue later on when she jumped on stage to console her.

What might stand as more of a constant reminder for Cyrus is the giant blow-up version of Floyd, which is actually a part of her Bangerz stage set. Later that evening, Cyrus took a moment during the live show to go over and hug the figure.

Despite the overwhelming amount of support from her legion of fans after the announcement on Tuesday, April 1, it seems like Miley is rather inconsolable at the moment and needs more time to deal with Floyd’s death.

This isn’t the first time that the pop star has lost a pet. Back in 2012, she lost her Yorkshire Terrier Lila after a fatal attack caused by another pet. Best wishes to Miley as she copes with her loss during this difficult time.