Orlando Bloom is a single father now, but he had one of his biggest days in Hollywood when he received his very own star on the Hollywood Walk of Fame. 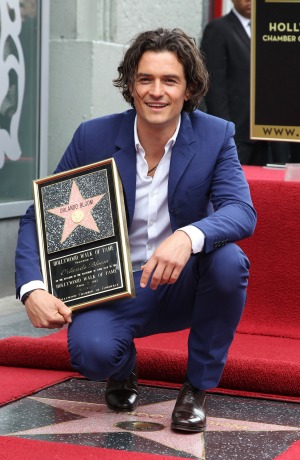 Orlando Bloom may be newly single, but he’s also a big star. The Pirates of the Caribbean actor was honored with his very own star on the Hollywood Walk of Fame on Wednesday, April 2.

“For a kid in London, Hollywood seems like such a mythical place,” Bloom told Variety about the honor.

The 37-year-old was joined by his son, Flynn, at the ceremony and unveiling of his star.

Bloom was mostly an unknown only 15 years ago, before he landed huge roles in the Lord of the Rings and Pirates of the Caribbean franchises. Soon after, he became a household name.

“I would say that I’m more conscious now than I have been. As a young actor, I found myself in all these movies at once, with two big trilogies, and a Cameron Crowe film, and working with Ridley Scott a couple of times, I was on this sort of rocket to the moon, as it were,” he said. “It was all just sort of happening in front of me and I was jumping into everything. I’m much more strategic now than I’ve ever been before, much clearer about the kinds of movies I like to watch, and the ones that play to my strengths.”

The Hobbit 2 sneak peek gives us the creeps >>

Bloom has had fun, but he is now dedicated to raising his son. After his recent split from wife Miranda Kerr, he is learning more and more what his priorities are.

“Now that I have my son it gets a lot more serious — I want to be in his life and have as much input and influence on his life as I can,” he told The Times.

You can see Bloom next in The Hobbit: There and Back Again, in theaters Dec. 17.