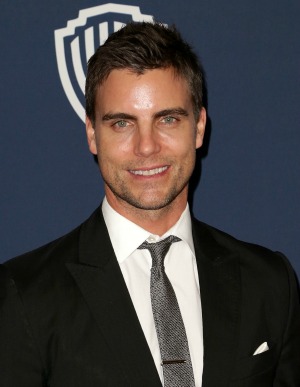 It was a case of life imitating art for hunky actor Colin Egglesfield this weekend, with the thespian being arrested early Saturday morning in Arizona.

Judge Joe Brown arrested for contempt after “riot” in court >>

Egglesfield was apprehended by an officer who claimed to have seen him flip over a table and knock over barriers intended to protect artwork at the Tempe Festival of the Arts, according to a police report obtained by CBS 5 in Arizona.

Egglesfield portrays Tommy Rizzoli on TNT show Rizzoli & Isles, a character who was arrested for running over a priest at a crosswalk on his third DUI violation.

The actor was released after posting a $1,000 bond and he was charged with criminal damage and disorderly conduct.

The event where the arrest occurred was held at Tempe’s Mill Avenue, not far from the city of Scottsdale, where fellow actor Jason London was arrested on similar charges back in January of 2013. The Dazed and Confused actor was accused of punching a bouncer in the face outside a popular Scottsdale bar and he also defecated in the police cruiser after being arrested, according to the police report.

For Egglesfield, it seems as if his Arizona getaway was smooth sailing prior to the shenanigans on Mill Avenue. Egglesfield had a family day with his brother and dad, at least judging by the cute Instagram photos he posted of the trio enjoying a round of golf and then taking in an Arizona Diamondbacks baseball game.

Playing golf with pops and my bro in AZ

Egglesfield seemed to recover quickly from his wild Arizona adventure. He posted another photo on Instagram in which he was looking bright and shiny just days after his arrest.