Jenna Fischer is just about to welcome a new member to her family, but she admitted she is not even close to being ready for another baby. 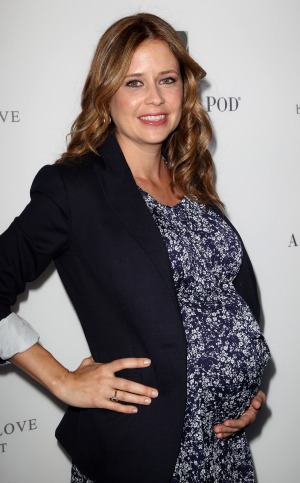 Jenna Fischer announced her pregnancy only a few months ago, but she is apparently “very close” to giving birth. The actress showed up to Jennifer Love Hewitt’s maternity line launch party, and she opened up about her second pregnancy. She admitted she is not quite ready for another baby.

“The nursery is not done and there’s no name picked out and I’m close!” Fischer told E! News. “I’ve been nesting like crazy, but I’ve been doing things that are sort of zany, like I became obsessed with cleaning my basement. You’d think I’m putting the baby down there. I’m not! But it’s very clean and organized.”

Fischer’s new baby will be joining 2-year-old Weston, so the mom knows what to expect this time. She said, “I have all the baby supplies, I just don’t have nursery decor or name picked out yet.”

Fischer also talked about struggling with her baby weight the first time around — something she had to do in front of the camera — but, this time, she isn’t worried at all.

“I’ve been craving a lot of fruit and salads,” she said. “More light things. I’m actually really grateful because I don’t have the best impulse control as evidenced by how I just let myself go with every craving in my first pregnancy. This time around it’s been easier to eat healthy because it’s just what I feel like. I’m grateful for that.”

The Office‘s Jenna Fischer defends keeping on the baby weight >>

The Office actress didn’t reveal everything about her baby, but she did say she is “less anxious” this time than when she was pregnant with Weston. Her and her husband, Lee Kirk, are keeping some things secret.

“We know the sex. We can at least eliminate some names,” she said. “There’s a lot of unisex names now, though, so we have to consider all those.”

Even with a toddler and a baby on the way, Fischer is still staying busy. She will next be seen in Kiss Me with Emily Osment and John Corbett.