Nicole “Snooki” Polizzi reportedly delays wedding to Jionni LaValle from fears that her fiancé and father of her child is cheating on her. 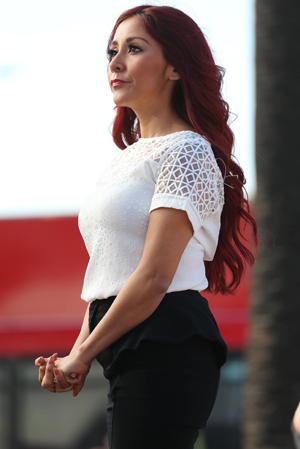 Fearing that her fiancé Jionni LaValle may be cheating on her, pregnant Nicole “Snooki” Polizzi has delayed her wedding.

A new report is claiming that Polizzi’s fiancé and baby daddy may be cheating on her, so she has been delaying her wedding, RadarOnline claimed. The reality star’s friends are saying that she is now unsure about her decision to marry LaValle because he has a tendency to stray. “Jionni would definitely cheat on Snooki,” an insider said, adding there is no “doubt” about it.

Pregnant with her second child, Polizzi has been through lots of drama with LaValle as chronicled in her reality shows Jersey Shore and Snooki & Jwoww. The two are already parents to 7-month-old Lorenzo, with whom they previously appeared to be a happy family.

However, Jionni is known for playing around on Polizzi, the insider added. “It’s nothing new, and, unfortunately, it isn’t going to change.”

Eyewitnesses claim to have seen LaValle when he was on vacation in Florida and was partying with friends at the famous Elbo Room in Fort Lauderdale earlier this month. “He was hitting on women left and right.”

How Snooki knew Jionni LaValle was “the one” >>

But, while Polizzi is supposedly questioning her future marriage to LaValle, she is continuing to plan the wedding anyway.

No official word has been released on whether the cheating reports are true, and GossipCop has actually stated that the rumors about Polizzi and LaValle’s wedding being delayed are untrue. An insider to the site said the reports are “totally inaccurate.”

Plus, Polizzi just tweeted today, “Can’t wait to marry the love of my life this fall @JLaValle #onlyus.”

LaValle not only responded to the tweet, but even suggested having more kids with his future wife.