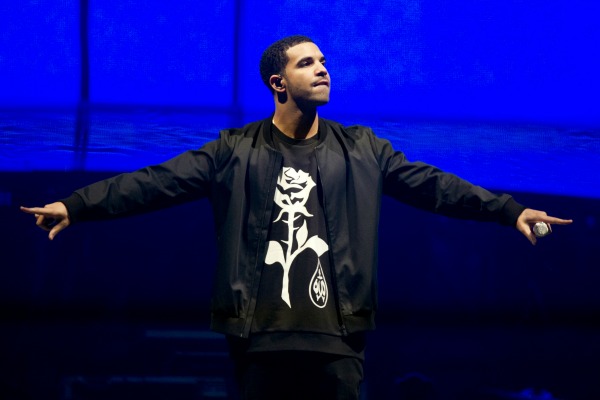 Drake may be cozying up to Rihanna, but there’s another A-list star that the Young Money MC has his eyes on and her name is Jennifer Lawrence.

On Tuesday night, April 1, the MC took to his October’s Very Own blog to post a brand-new song called “Draft Day.” During the almost-five-minute tune, which features a distorted sample of Lauryn Hill’s 1998 classic “Doo Wop (That Thing),” Drizzy raps about his detractors, success and makes sure to reference a few people, including American Hustler star Jennifer Lawrence.

A little more than two minutes into the track, the Toronto MC spits: “On some Hunger Games s***/I would die for my district/Jennifer Lawrence/You could really get it/I mean, for real girl, you know I had to do it for ya.”

While Lawrence will likely love the shout-out from Drizzy, there are a few people that might not be so keen with “Draft Day,” like Jay Z. Many have come to speculate that the rapper is actually throwing some shade toward his fellow hip-hop heavyweight. At one point in the song, he rhymes, “Just hits, no Mrs./That’s for the married folk.”

The reference dates back to Drake’s February interview with Rolling Stone magazine, where he confessed that HOVA can’t seem to rap these days without making any kind of references to the arts. Later on, Jay Z retaliated on Jay Electronica’s “We Made It,” rapping, “Sorry Mrs. Drizzy for so much art talk/Silly me, rappin’ ’bout s*** that I really bought.”