Britney Spears jokingly wrote on Twitter that she wants in on the anniversary performance of a viral wedding toast video, which features her song “Work B****.” 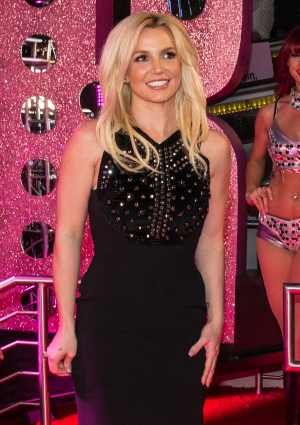 Bradley Bredeweg, who happens to be the co-creator and executive producer of ABC Family’s The Fosters, wanted to surprise his best friend Stephanie Huntington with something memorable that symbolized their friendship. “We’ve always been there for each other, but here’s the thing. There’s been someone else that’s been there with us along this journey together. Her name is Britney Spears,” he told the room as it filled with laughs.

“In a way she’s sort of been the soundtrack to our lives. I can think back to all these pivotal moments in our lives and I can recall a Britney Spears song or Britney Spears video,” he continued. “We all know that marriage takes love and care, but marriage also takes a lot of work, so you better work, b****.”

Immediately afterwards, Huntington burst out with a giggle as if she knew exactly what was going to happen. Once the music began, his backup dancers took the floor as Bredeweg struck a pose and executed a performance of Spears’ single “Work B****” with the singer’s original choreography.

Even though the video was uploaded to YouTube in early March, it started making rounds on the internet this weekend and finally nabbed Spears’ attention on Monday. “Ummm….this wedding toast is INCREDIBLE!!! I want IN on the 10 year anniversary performance!!! #WORKBXXCH,” she wrote. But it wasn’t just Spears who was amazed by the video. The viral clip was just short of 9,000 views on Sunday, March 30, before jumping to over 280,000 views.

Now if only my best friend steps it up on my big day.