Michael Strahan is about to become one of the busiest television personalities in the industry if the rumors are to be believed. Are they true? 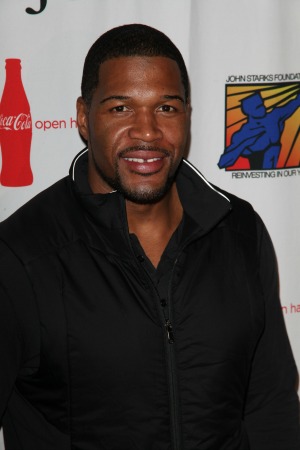 Is Michael Strahan becoming the new Ryan Seacrest? If you read all of the news reports, the answer is yes. Strahan addressed those rumors on Live with Kelly & Michael on Wednesday.

On Tuesday, the media started hinting that the morning TV personality was headed to Good Morning America as a special correspondent. However, Strahan corrected that the reports were a bit premature when he spoke with cohost Kelly Ripa this morning.

He explained, “The big news [is] that I’m going to be on GMA now. But it’s somewhat surprising. We had a meeting and talked about the possibility of doing something there.”

The 42-year-old then went to see a screening of Captain America and came out of the film with his phone exploding with the news.

He shared, “What’s going on here? We talked and we’ll see.”

One important thing that Strahan did promise was that he was staying on the morning show with Ripa.

Ripa quipped, “We just want to know how many cups of coffee we need to have ready by the time you get here.”

GMA has been undergoing a bit of a shake-up lately with two big personalities exiting for opportunities at NBC. Sam Champion headed to the Weather Channel and Josh Elliott was just hired by NBC Sports. GMA has been the ratings leader, but critics are waiting to see if these departures affect the top-rated show.

As for Strahan, he will continue to juggle his duties at Live with Kelly & Michael and his Fox NFL Sunday gig for football season whether he heads to GMA or not.