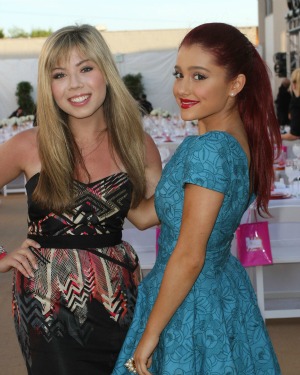 Nickelodeon’s hit television show Sam & Cat has enjoyed great success with its first season. However, its success appears to have recently been overshadowed by a series of steamy snapshot scandals.

Jennette McCurdy, one of the stars of the hit comedy, had racy lingerie photos of her leaked online last month, and it appears the scandal isn’t going to blow over anytime soon.

Just in case the network’s bosses’ heads weren’t already about to explode from having to deal with a scandal pertaining to one of their stars, things got a whole lot worse for them when a topless picture of McCurdy’s co-star Ariana Grande surfaced on the web yesterday.

Fans were shocked when they noticed several Twitter posts that claimed to offer links to nude photos of the “Baby I” hit maker. And there were clearly quite a few people out there who wanted to see the brunette beauty nude because the tagline #ArianasNudesLeaked began trending on Tuesday.

But fans can rest easy because it turns out the Photoshopped pictures of the pop singer appearing topless on the beach are, in fact, fakes. And when the links were clicked on they offered up a simple “Happy April Fools’ Day” message (although that kind of defeats the point of creating a hoax in the first place) rather than revealing an embarrassing nude.

Poor Ariana. There’s no doubt it was not fun to fall victim to an April Fools’ Day hoax. However, she was a rather unrealistic candidate for a nude photo scandal anyway. We think she’s far too smart and mature to ever take her clothes off on camera.