Lauren Conrad may have previously said she didn’t get the whole dyed purple hair trend, but she’s obviously changed her mind. Perhaps don’t knock a trend before you try it? 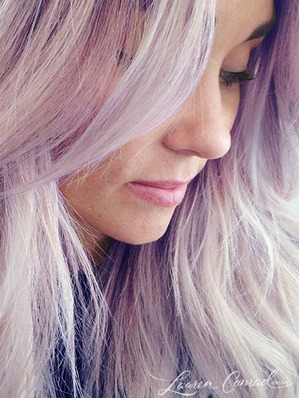 Just a few weeks ago, Lauren Conrad said she didn’t get why so many beautiful celebrities and models were dyeing their locks lilac, but she clearly knocked the trend before she had time to try it.

It’s either that or she is playing an elaborate April Fools’ Day joke on her followers because who’s the latest celebrity to sport a brand new colorful hairstyle?

You guessed it, the former Hills star.

Style icons such as Ireland Baldwin, Kelly Osbourne and Nicole Richie are rocking purple hair, and now we can add the stylish designer to the ever-growing list.

Conrad took to her blog on Tuesday to leave a note titled Beauty Note: Pretty in Purple, and along with the note was a picture of the 28-year-old beauty’s new lilac hairdo.

It may seem like a strange hair color choice because only recently did Conrad tell Us Weekly, “I’m not a big fan of purple as a color! It looks great on them but not me.”

However, she did admit to taking some beauty risks in the shower.

“I have pink hair dye in my shower, and sometimes for fun I’ll do it on a Friday and then have pink hair for the weekend,” the blond beauty confessed to the mag. “It washes out! I’m not fully committed to color but once in a while it’s fun.”

OK, so people can change their minds, and Conrad appears to have done so. She wrote a little note on her blog, saying, “As I’ve mentioned before, I keep temporary pink hair dye in my shower for whenever I’m in the mood for a fun beauty look. Sometimes on a Friday I’ll work some pink dye into my mane and enjoy pink-tipped tresses until Monday when I wash my hair again. It’s a fun off-duty look for the weekend.”

“But this time, I decided to take the plunge and try a semi-permanent color,” she added.

“This one stays in for 6 to 8 weeks before washing out. I really didn’t think that purple was my color, but after seeing several others wear it recently, I decided to give it a try.”

And we’re quoting from Conrad herself now, “It just goes to show that you should never knock a trend until you try it…”

What do you think of Lauren Conrad’s new hair color?