Poor Miley Cyrus is inconsolable after the unexpected death of her beloved pet pooch Floyd, and she has taken to Twitter to share her sad news with fans. 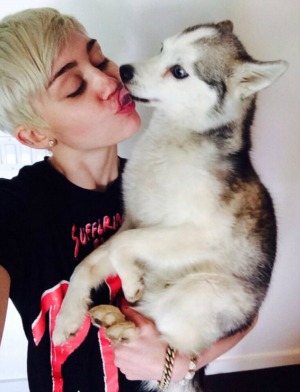 Poor Miley Cyrus! The “Wrecking Ball” hit maker recently expressed her sorrow on Twitter after the passing of her beloved pet pooch Floyd.

“Today is the 2nd worst day of my life,” the twerker wrote on Twitter on Tuesday. And it wasn’t long before fans found out why — Cyrus’ Alaskan Klee Kai died unexpectedly while she was away on her Bangerz tour.

“I don’t wanna say it because I don’t want it to be real… But my precious baby Floyd has passed away,” she wrote.

It is no secret that Cyrus is a serious dog lover. She added Floyd to her collection of pooches in 2011, and after three years together, his death has really upset her. In fact, the 21-year-old star is so upset that she even went so far as to say she doesn’t know how she can live without him.

“I know I don’t mean it but I wish he would’ve taken me with him this is unbearable. What am I gonna do without him?”

Although, this comment was not received well by fans who responded by telling Cyrus it was not funny to suggest such a thing.

Cyrus continued to update her fans on how she was feeling throughout the day, tweeting messages such as “I am miserable” and apologizing to the fans who will be attending her concert tonight in Boston, Massachusetts.

“I’m sorry in advance if I am not myself tomorrow Boston. I will try my best to be my best,” she tweeted.

Cyrus is a mom to her dogs Bean, Happy and Mary Jane, but, unfortunately, Floyd is not the first one of her babies to die. In 2012, Cyrus was heartbroken when her Yorkshire Terrier Lila died unexpectedly after a fatal attack from one of Cyrus’ other pets, Ziggy.

Whilst no pet can ever replace her beloved Alaskan Klee Kai, at least she still has her other pooches to comfort her.

50 mins ago
by Reshma Gopaldas