S.H.I.E.L.D. agents join forces to hunt for Deathlok and the Clairvoyant, but when they find their quarry, one agent takes things too far and another agent is suspected of the worst kind of treason, in “End of the Beginning.” 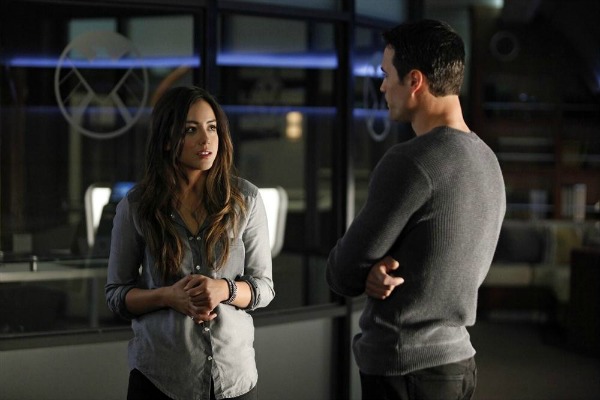 I think the lesson we can all learn from this episode of Agents of S.H.I.E.L.D. is that you can’t trust anyone, not even those people you think are your friends and allies.

And no, I’m not actually talking about May and her still-to-be-determined actions with the phone calls to the encrypted line. Strangely enough, I think I trusted her more by the end of this episode than I did anyone else. In my review of the last episode, I called her a liar and she definitely is that — if for no other reason than she hid the fact she was reporting to someone.

But when Coulson accused her of working for the Clairvoyant, I just didn’t feel it. I know that she’s reporting to someone, but I’m beginning to think that she might be doing it more as a protection thing. Maybe someone out there is keeping track of Coulson, and Skye as well, to make sure they’re surviving after being hit with the mysterious alien juice.

In the beginning of the episode, when all of the agents figured out that the Clairvoyant might be someone they already know, I began to suspect everyone. I was convinced for a while that it was Blake and even though he got shot, I still wasn’t ready to give up my suspicions too easily. Especially when it was then discovered that the Clairvoyant wasn’t someone with special abilities at all, just a person who had access to everyone’s secret files.

When they found Nash, I wasn’t completely convinced that he was really the Clairvoyant. It just seemed way too convenient that they would find him so easily. When Ward shot him down, I was shocked for a few reasons. First because it just wasn’t something I ever expected Ward to do. It also spoke of his strong feelings for Skye and I don’t think even he understands what those feelings truly mean to him. If he wanted to be with Skye and he and May are just sex buddies, then why not be with her? There must be something holding him back but I don’t know what it is.

The other shocking part about Ward killing the Clairvoyant came when Coulson accused him of doing it on an order. I never thought for one second that was true. I knew that he completely acted from his gut, but it was then that I realized that someone could have set him up to do it. Someone knew Ward well enough to press all his buttons and make him go off. Who was it? At this point, it could be anyone and I’m even beginning to suspect Garrett — which is not easy for me because I really like his character.

Overall this episode again threw everyone into some surprising directions and I have to say that I enjoyed the twist of finding out that the Clairvoyant wasn’t actually a clairvoyant at all. Now we just have to find out who he (or perhaps she) really is.

Deathlok leaping through a ceiling. You don’t see that every day.

“So you’re saying we should obey the rules?”
“Who are you and what have you done with Skye?” — I was so thinking the same thing.

Finding it sad that the Clairvoyant’s idea of a gift for Mike, or Deathlok, was more machinery for his body. Poor guy.

Garrett telling Skye that she had made a big difference on Ward.

May telling Fitz-Simmons to contact her if Skye or Coulson displayed any strange behavior. Yeah, that wasn’t creepy at all.

“Stop worrying. You wear your heart on your sleeve, and your face.”

Trip asking Ward to think about what he’d want to do if Skye hadn’t made it. Very good point.

Blake trying to appeal to Mike on behalf of his son.

Coulson realizing that Blake had tagged Deathlok with a tracker.

Ward admitting that he didn’t regret what he did, as long as it meant Skye was safe.

What did you think of this episode of Agents of S.H.I.E.L.D.? Who do you suspect?