Stephen Colbert addressed #CancelColbert on Monday night’s The Colbert Report with jokes and a skit. 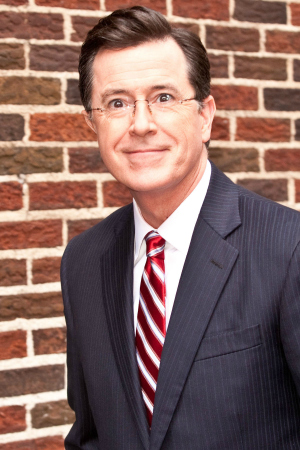 You sure can’t stop a comedian from telling jokes. On Monday night, March 31, Stephen Colbert made light of the #CancelColbert mania that went viral after the official Twitter account for his show sent out an out-of-context tweet, which many perceived as racist.

In a segment called “Who’s Attacking Me Now?: #CancelColbert,” the comedian took control of the situation with his usual satire, saying, “The interweb tried to swallow me whole but I am proud to say that I got lodged in its throat and it hacked me back up like a hastily-chewed chicken wing. I’m still here.”

All jokes aside, Colbert took a few minutes to explain the backstory of how everything unraveled. On Wednesday, March 26, The Colbert Report mocked Washington Redskins owner Dan Snyder for creating a foundation to support Native Americans by joking that one of the caricatures Stephen plays on the show was going to create The Ching-Chong Ding-Dong Foundation for Sensitivity to Orientals or Whatever to show support for the Asian community.

Just a few days later, the account for the show tweeted the line to the joke without a link or reference to the original joke, creating the chaos. Colbert made it a priority to explain that he doesn’t even tweet from the account and is only responsible for tweets from his personal account, @StephenAtHome.

But at this point, the damage was done. “I’m not trying to throw anyone under the bus… but when I saw the tweet with no context, I understand how people were offended,” he explained to the audience.

In the end, Colbert took the high road when he urged all the people threatening Suey Park, the woman who started the trending topic, to stop sending messages. “If anyone is doing that for me, I want you to stop right now,” he demanded. “She’s just speaking her mind and that’s what Twitter is for, as well as ruining the ending of every show that I haven’t seen yet.”