After months of speculation, Keri Russell and Matthew Rhys’ romance is confirmed after the couple is seen out on a cozy date. 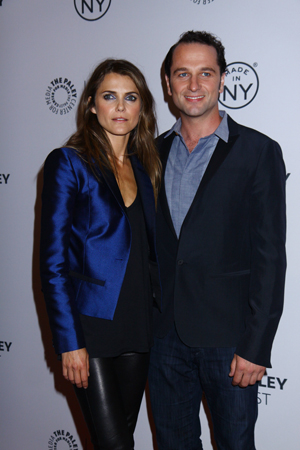 Rumors spread that Keri Russell and her The Americans co-star Matthew Rhys were dating earlier this year, and now their relationship has been confirmed. The couple was seen getting cozy last week during a theater date together.

When Russell and Rhys fueled romance rumors after being seen taking a romantic stroll earlier this year, they denied they were in a relationship. But, after going out together on March 27, insiders for People magazine reported seeing the pair whispering to each other and displaying lots of PDA.

Rhys was asked by People last month if he and Russell were romantically involved, and he did not deny or admit that they were. “That’s the best [rumor] I love,” he said, adding that even his mom asked about the pesky rumors.

But, during their most recent date, an eyewitness said they appeared like a couple as Russell stroked Rhys’s hair while the duo spoke softly to each other.

Russell announced late last year she was separating from her husband of seven years, Shane Deary, with whom she has two children. Apparently, Russell and Deary had been living separately since last summer, but their rep told the media that their split was “amicable and their focus is on their children.”

While the former couple did not reveal their breakup for some time, rumors began swirling when Russell went solo to premiere events and was often spotted out alone with the children. When the former Felicity star made headlines after her home was burglarized while she and the children slept inside in December, many questioned why Deary was not in the house with them.