Cara Delevingne is fed up with her paparazzi stalkers. Taking to Twitter, the main woman in Michelle Rodriguez’s life vented her frustrations and asked what will it take to make a permanent change and give celebrities privacy. 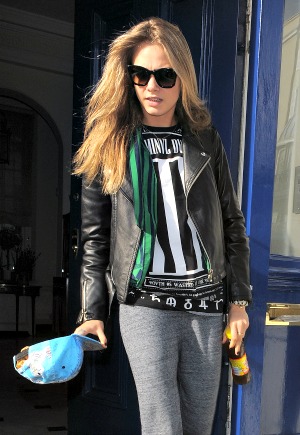 Cara Delevingne’s Twitter feed is filled to the brink with her feelings about the paparazzi. Airing her frustrations over being followed, the English model and actress — who has recently made headlines worldwide for frolicking around topless on the beach with actress Michelle Rodriguez — is calling for change.

Taking to the social media site on Monday evening, the 21-year-old beauty vented about being followed by ”assassins with telescope lenses” wherever she goes, noting it took the loss of Princess Diana’s life in a high-speed car chase with photographers in 1997 to bring about new privacy laws in France.

Posting five Twitter messages in quick succession, Cara Delevingne, who is pictured here in mid-March leaving her London home, made her case. Check out the model’s tweets here:

Announcing the conclusion of her vent, Delevingne added, “Rant done!! Needed to get that off my chest for a while! Also, I have never once seen a woman pap! Can someone explain that!?”

Delevingne has an uphill battle on her hands to get laws changed, but that doesn’t mean stars have never made headway. Kristen Bell and Dax Shepard have gotten numerous media outlets, including SheKnows, to join their #NoKidsPolicy campaign, which aims to protect the privacy of stars’ children.

Do you think Cara Delevingne’s paparazzi fight will result in any more privacy for celebrities?