Pharrell has even more to be happy about these days — he’s joining The Voice. 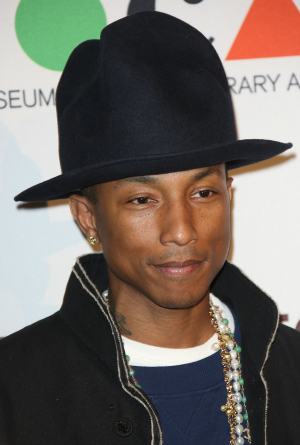 We’re only three months into 2014, but Pharrell is seriously having the best year ever. Not only is he riding high off the success of his hit song, “Happy,” but the industry heavyweight has been announced as the newest judge on the upcoming season of The Voice.

On Monday (March 31), the official Twitter account for the hit NBC show sent out a series of funny tweets, offering followers hints about the identity of their new judge. After posting photos of a skateboard, a happy face and some killer shoes, they made their big reveal, tweeting, “Okay, we can OFFICIALLY say it! WE ARE SO #HAPPY to announce PHARRELL WILLIAMS = #NewVoiceCoach for SEASON 7.” Skateboard P kept relatively mum on the issue, but he did reply to the show’s announcement, writing, “This is going to be so fun.”

Related story The Best Revenge Songs of All Time

No word on whether or not his famed Arby’s hat will join him.

Pharrell endorses Hillary Clinton — but will she actually run for president? >>

Pharrell will replace show veteran, CeeLo Green, who told Ellen DeGeneres last month that he was departing the singing competition to focus on his bread and butter. “I don’t want to wear out my welcome there… I have so many other things that I want to do. I haven’t released an album in four years,” he told the talk show host.

While some may be disappointed to see CeeLo and his cat, Purrfect, leave the panel, the announcement lit the blogosphere on fire and even catapulted #NewVoiceCoach to Twitter’s top 10 trending topic list in the U.S.

Pharrell isn’t exactly a stranger to the The Voice. During Season 4 of the show, the singer took to the NBC show as an adviser to Team Usher and, later on, as a special guest to perform “Blurred Lines” with Robin Thicke and T.I.