Rick allowed his inner beast out in The Walking Dead Season 4 finale. We take a closer look at his final steps from farmer back to fierce protector. 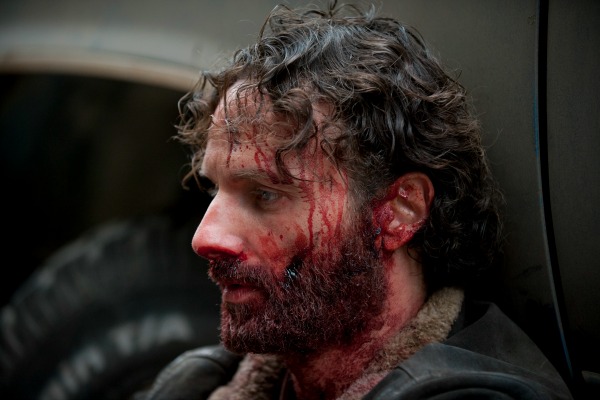 If you had any doubts about the kind of man Rick (Andrew Lincoln) was or what he was willing to do to protect the ones he loves, all of your questions were answered in The Walking Dead Season 4 finale.

Rick’s journey has been one full of massive character shifts since he first opened his eyes from a coma and went stumbling through a hospital ravaged by a disaster he could not yet comprehend. It’s perhaps fitting that he began his adventure in the zombie apocalypse without understanding what had happened. Maybe he needed the instant restart to his life so that he could be ready for what was to come.

The Walking Dead: How safe is Terminus? >>

The man who woke up in the hospital would probably look at the man who resorted to biting a man’s jugular and be shocked by his actions. Or would he? Even in the beginning, it was obvious that Rick was a survivor and a man who didn’t balk when it came to doing those things that needed to be done. Before the apocalypse he never would have killed his best friend, but when that best friend became a threat to him and his family… so long, Shane.

After Shane’s death came Lori’s tragic demise and Rick was sent spiraling along a new path — one of insanity. When he came through the tunnel, he was ready to go back to life as he knew it, but Hershel had other ideas. Seeing how Rick’s son Carl had so coldly killed an unarmed man, Hershel decided it was high time that Rick became a better role model. Getting the hardcore lawman to give up his gun and pick up a shovel wasn’t easy, but eventually Rick saw the benefits in letting others fight so he could be a better father to his children.

Sadly, the world of the zombie apocalypse isn’t one where you can drop your weapon and take up farming. When the Governor came and destroyed the lives of those living in the prison, Rick was sent in another direction. It left him and his son, and eventually Michonne, on the road alone to fend for themselves. No longer was Rick able to shelter Carl and keep him from seeing the horrors of the current world.

That became abundantly clear in the final episode of The Walking Dead‘s fourth season. With a gun to his head, Rick watched as the man he calls brother was being beaten to death and both Michonne and his son were threatened with rape. In one moment, Rick let go of the man that wanted to live peacefully and embraced the man who did anything to keep his family safe.

When Rick killed a man by tearing into his neck with his own teeth, he became a BAMF of epic levels. After that, he was a force to be reckoned with and though he and his group were left at the end of the episode trapped in a railroad car, there is no doubt that he will prevail. Once you’ve torn out a man’s throat, what are a few people holding guns?

Welcome back, BAMF Rick — we missed you.

What did you think of Rick’s actions in The Walking Dead Season 4 season finale?