Mila Kunis and Ashton Kutcher jetted off to Iowa for a family trip after their pregnancy news, going away for just one day. 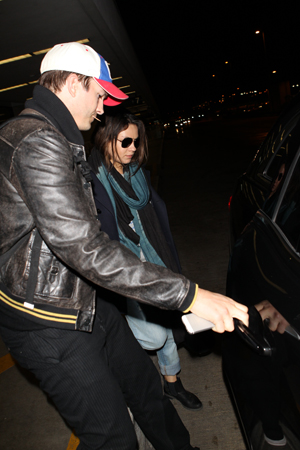 After news they are expecting their first child together, Mila Kunis and Ashton Kutcher were spotted going to visit the actor’s family in Iowa. It was a very short trip, however, with the duo returning to Los Angeles after just one day.

Kunis and Kutcher were seen at the LAX airport on Sunday when they came back from their lightning-fast family trip. The Jupiter Ascending star was even sporting the same outfit she wore the day before on her way to Iowa.

While on their one-day stop to Kutcher’s hometown of Cedar Rapids, the famous couple was snapped taking a walk around the neighborhood, with Kunis’ baby bump quite evident under her coat. The duo stayed with Kutcher’s mom, Diane Finnegan Kutcher, and also went out to dinner and did some shopping at Target, People magazine reported.

When Kunis and Kutcher landed in LA after their weekend trek, the lovebirds were seen getting “super lovey-dovey together.” They also even kissed a few times while walking through the airport, according to an eyewitness.

This was the couple’s first visit to see Kutcher’s family after revealing their baby news. However, Kunis had already spent time with her soon-to-be in-laws when she and Kutcher spent the 2012 holidays in Iowa. The two were also seen going into a Red Lobster with Kutcher’s parents the day before Christmas.

Kunis and Kutcher are reportedly thrilled to become parents soon and can’t wait to be a family together.

“They are happy, healthy and excited to start a family,” an insider told Us Weekly magazine. “[Kunis] is all about being a mother.”