Sara Gilbert and Linda Perry have officially tied the knot! After a year-long engagement, the couple walked down the aisle over the weekend. 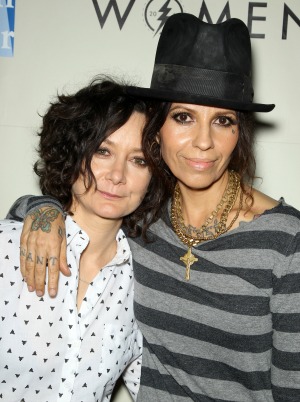 The brides haven’t confirmed that a wedding took place, but actress Juliette Lewis spilled the beans for them. On Sunday, Sara Gilbert married songwriter Linda Perry. The news was confirmed by Us Weekly.

The Talk co-host has been engaged to Perry for about a year. The musician staged a romantic proposal in a Los Angeles park with their favorite song, “Love Song,” by The Cure playing back in April 2013.

Perry made the proposal rather fun. Gilbert described the moment on her CBS daytime show last year, “She goes to her backpack and she pulls out these T-shirts and the first T-Shirt says ‘will’ and then puts on another T-shirt and it says, ‘you,’ then ‘marry,’ ‘me.’ And the last one’s a question mark. It’s the most amazing proposal ever.”

The final part of the proposal was John Waite singing another one of their favorite tunes, “Missing You,” to the couple in person immediately after Gilbert said, “Yes.”

While few details from the weekend nuptials have been revealed, Lewis gave a quick glimpse of the atmosphere before the ceremony began. She tweeted what was about to happen to her followers.

The newlyweds began dating in 2011 after the 39-year-old former Roseanne star split with longtime love TV producer Alison Adler. They had two kids together. Gilbert officially came out as a lesbian in 2010.