Rapper Benzino credits his late mother for saving his life after he was gunned down by his nephew while on the way to her funeral. 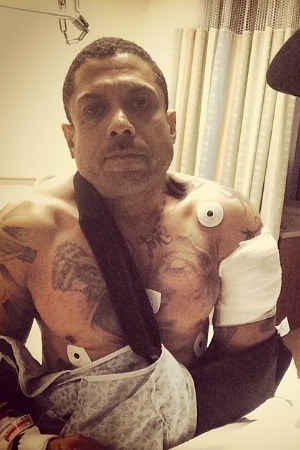 You don’t expect to read stories about people getting shot on the way to a funeral, but it’s even more surprising when you read a story about someone who is shot by a relative while on their way to a funeral. This is what happened to rapper Benzino — whose real name is Raymond Scott — on Saturday.

The hip-hop producer was on his way to his mother’s funeral at St. Peter’s Church in Massachusetts when his nephew Gai Scott, 36, shot him. However, luckily for the rapper, the bullet hit him in his right arm, and he managed to avoid a much more serious fate.

According to Ace Showbiz, the Plymouth County District Attorney’s Office will charge Gai with assault with intent to murder. So how do things get so bad that family members want to shoot one another?

Officials said, “There has been growing family tension between Raymond Scott and Gai Scott. At some point when the cars were side by side, Gai Scott fired several shots into the red Dodge SUV being driven by Raymond Scott.”

Is Chris Brown planning to buy his way out of jail? >>

In good spirits, Benzino took to Instagram to share a picture of himself in the hospital, which he captioned, “Feel much better, GOD IS REAL @luvheraltheaheart is my SOULMATE……. MY MOTHER TOUCHED ME, IM CERTAIN.”

According to Ace Showbiz, Benzino revealed to The Patriot Ledger on Sunday that he credits his late mother for saving his life.

Judge Joe Brown upset about “loss of liberty” after arrest >>

“I’m feeling much better today than yesterday,” the reality TV star told the newspaper. “No one wants to put (their family) through that … but I look at it like she (his mother) is the guardian angel that got me through it.”