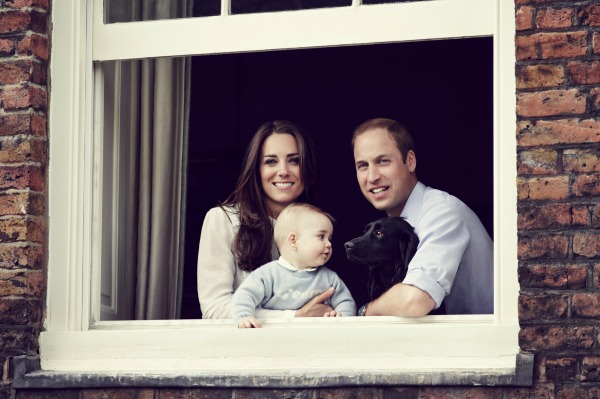 On the eve of their first royal tour as a family, Prince William and the former Kate Middleton have released a darling new photo that shows off how much their son, little Prince George, has grown — and how much he loves their pet dog!

The pic, taken by Jason Bell (who also snapped little George’s official christening photos), shows the family sitting at a window of their London home, Apartment 1A of Kensington Palace. Will and Kate smile brightly while George, dressed in a pale blue sweater with his name knit onto the front, stares at the family dog Lupo with obvious delight.

Kate wore the cream Temperley Rodeo blouse, featuring a lace and ruffle detail with semi-sheer arms, in which she was last spotted at the Calgary Stampede during the couple’s 2011 tour of Canada.

We last got a glimpse of now-8-month-old George in October, wearing a historical gown at his christening.

The Duke and Duchess of Cambridge are set to visit New Zealand and Australia from April 7 to April 25, 2014, George and his new Spanish nanny included. What events the baby might attend have not yet been announced.

“George being just a little over eight months old by the time they travel, I’m sure you will appreciate that the couple will have to make a final decision on those moments much closer to the time,” Prince William’s private secretary told press.

The couple is stoked for the trip, according to Kensington Palace officials. “There’s no hiding the enthusiasm for the visit by both the Duke and the Duchess — the Duke, because he has been before; and the Duchess, because she has never been to either country but has wanted to do so as long as she can remember.

“The Duke has no doubt that his wife will fall in love with New Zealand and Australia every bit as much as he did, some years ago.”