It’s been a thrilling few months for Megan Hilty and her husband, Brian Gallagher — a wedding, two birthdays and a baby announcement. 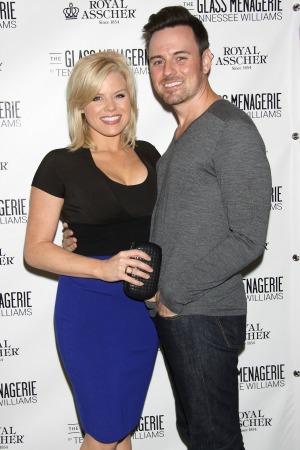 Megan Hilty and her new husband, Brian Gallagher, have so many things to celebrate. On Saturday, they announced to Us Weekly that they were expecting their first child together. The big news was revealed on Hilty’s 33rd birthday.

The duo discovered they were expecting back in January, on Gallagher’s 34th birthday. The Broadway star told the entertainment magazine, “We took the test together. It was the best present he got this year — or any other year, for that matter!”

The couple were married back in November. They were so happy to be together that they went straight to the wedding.

The former Smash star explained to People at the time, “We were so excited to be married that we skipped the engagement altogether!”

Now that the mom-to-be is expecting, she is craving all of those forbidden foods.

“Everything I can’t have!” she said. “I want sushi, tuna fish sandwiches, coffee and champagne.”

The expectant parents don’t know the gender of the baby just yet, but they will definitely find out ahead of time. One thing Hilty is looking forward to is maternity fashion.

Bachelorette Ashley Hebert has a baby on the way >>

She shared, “I haven’t shopped for any baby things yet. But I have found some amazing maternity dresses for the summer.”

The timing was perfect for the actress since NBC cancelled her sitcom Sean Saves the World, so her next project can be getting ready for their bundle of joy.

With a musician for a husband and her vocal talents, Hilty said, “This baby’s gonna be really sick of our voices by the time it arrives!”