Nick Cannon says Mariah Carey made him wait until the honeymoon — and revealed a list of other Hollywood stars he’s gotten busy with. 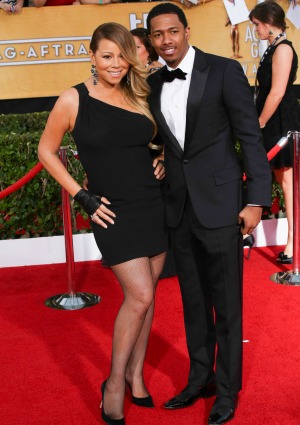 In an interview with Big Boy on hip-hop radio station Power 106, the America’s Got Talent host spilled the details of the couple’s very first time together: Their wedding night.

“On our wedding night, honeymoon style, in the Bahamas. That’s a real woman there, make you wait til you got married. Seriously, 100 percent,” Cannon said.

Classy. Cannon went on to explain how he landed the megastar in the first place — after all, she had steadfastly avoided marriage since her union with record exec Tommy Mottola went south in 1998.

“I spoke it into existence, I went hard at it,” he explained. “People would ask, ‘Who’s your celebrity crush?’ ‘Mariah Carey.’ I’m gonna show up at concerts, be backstage. Persisting. There’s a fine line between stalking and persisting.”

Eventually he and Carey worked together on a video and the rest is history. But prior to that fateful shoot, Cannon definitely kept busy with the ladies of Tinseltown. When asked to name five celebs he slept with, the names rattled off his tongue — including one very famous reality star.

“I bet she’s forgot because there’s been a lot of people since me.” Oh snap!

“She’s a great girl though,” he added. “Her family are some of the most incredible people I ever met in my life.”

Mariah Carey: Valentine’s Day is “all about me”
Mariah Carey: Being on American Idol was like being in hell
Mariah Carey curses as wardrobe malfunctions on live TV