Selena Gomez appeared irritated when she was served with a summons believed to be linked to the lawsuit against Justin Bieber for allegedly assaulting a photographer. 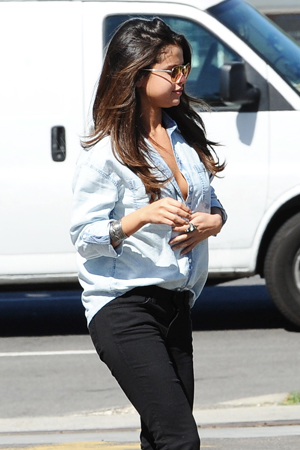 While out for a soda, Selena Gomez was taken by surprise by a summons officer who approached the annoyed looking singer with legal papers possibly regarding a Justin Bieber lawsuit.

As she exited a convenience store in Calabasas, California, on Thursday, March 27, Gomez was followed by a woman in a bright pink scarf who served her with the legal papers, TMZ reported. When the court runner caught up to Gomez, the 21-year-old star didn’t look very happy as she took the paperwork. However, the singer looked great in short shorts and a polka-dot button-down shirt.

Selena Gomez lets the sun shine where it normally doesn’t >>

Gomez was believed to be subpoenaed to testify in the lawsuit against Justin Bieber in which he’s being accused of assaulting a photographer. The Come and Get It crooner was out on a date with Bieber at the time of the attack, but the pair took off before cops got there, Us Weekly claimed.

“The victim complained of pain and requested medical attention. Personnel from the Los Angeles County Fire Department responded,” The Malibu-Lost Hills Sheriff’s Station said in a statement. “The victim requested a criminal report be taken regarding the incident and an allegation of misdemeanor battery report was taken at the scene.”

Justin Bieber and Selena Gomez: Back on? >>

Bieber is accused of kicking the paparazzo in the stomach while Gomez stood nearby, so the court wants her to give a detailed account of what went down. They also want her to talk about what she knows of Bieber’s short temper when it comes to photographers.

According to E! News, the suit filed against Bieber states that the young singer kicked the photographer karate-style on his lower-left rib cage, and then hit the right side of his face “hard,” pushing him against a parked car. Gomez ran out of her then-boyfriend’s van and yelled, “Justin, stop! They’re taking your picture!”

Meanwhile, TMZ is also reporting that sources claim Gomez is going to be summoned to testify in Bieber’s Miami photog-beating case as well. While she was not present for that incident, they allegedly want to question Gomez regarding the 20-year-old troubled star’s character.