A tornado drops young Amy Gumm in Oz, but instead of singing munchkins, she finds a b**** of a problem in the evil Princess Dorothy. 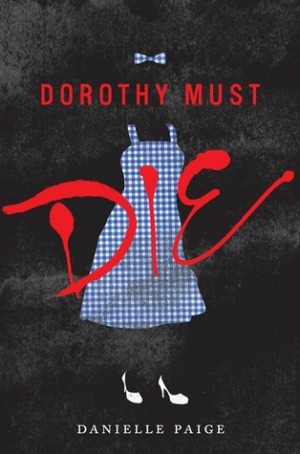 Amy has been looking for a change. She’s bored out of her mind in Flat Hill, Kansas. She doesn’t have any friends, and her self-centered mother is one step shy of a nervous breakdown. Not exactly Auntie Em.

Accompanied only by her mother’s pet rat (not exactly Toto), Amy wanders the yellow brick road and finds a dark, dilapidated version of the Oz she knows from book and film. She’s given a spot of advice from a boy with emerald eyes: “Don’t trust anyone.” She’ll do well to remember.

How Oz The Great and Powerful differs from the original flick >>

There are statues of Dorothy, as to be expected. After all, she killed the wicked witch and made everything OK, right? Right? Well, not exactly. Apparently, the power went to Dorothy’s head, and she’s now a magic-sucking princess who’s draining the life out of Oz.

Amy’s Oz is a creep-tastic place. There’s this product called PermaSmile that gives people hideous, huge smiles. A flying monkey (with chopped-off wings) is tortured for the “Crime of Sass.” It’s dark but also kind of funny. I want a T-shirt that says “Guilty of Sass,” thanks to this book.

This is Danielle Paige’s debut novel, and yet, she successfully mixes true creep factor with comedy. It has to do with her narrator’s voice. The novel is told from Amy’s perspective, and she’s funny — really funny.

Thanks to Amy’s sass, she soon finds herself in big trouble, but she’s saved by the Revolutionary Order of the Wicked. Why not? In this Oz, good is bad and bad is good. However, her task, well…

Amy’s not quite sure how to respond when she’s informed she’s been tapped as Dorothy’s assassin. It’s cool that she gets to learn magic, but the question remains: Will Amy end up a good witch or bad? And which is worse?

Paige’s Oz is so well described, I’m kind of nervous it might actually exist. In fact, Paige might be a witch. I’m totally cool with that, because if all witches write like this, we need a lot more witches in the world. Oh, and exciting news: The first 12 chapters of Dorothy Must Die are available for you to read right now.

And don’t miss the awesome trailer.