Our heart just breaks every time we hear a story involving drugs and Zac Efron because, well, he’s just so pretty. As much as we love Zac, his Skid Row story is a load of dog poo, and here’s why. 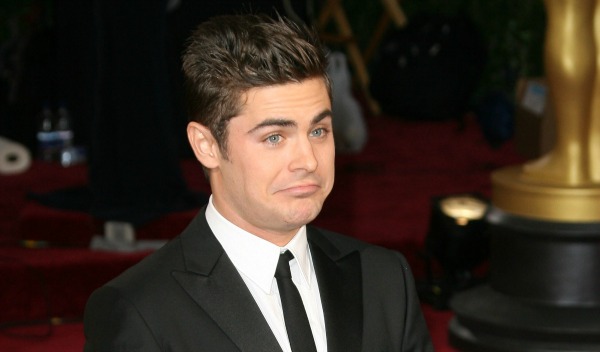 No one would argue that L.A. has some amazing sushi, and we’d do just about anything for it — except risk our lives. No sushi is that good. L.A.’s a big place. If your craving for sushi is that bad (after midnight?), you have lots of options, many of which don’t involve driving into the drug-dealing, gang-infested Skid Row. Is anyone ever that hungry?

TMZ quotes a Zac Efron friend as saying, “Zac’s a loner. He goes out rarely, and the idea of him driving for miles to go to some sushi restaurant in downtown L.A. after midnight is preposterous.” Ya think? Rumors of drug abuse and rehab have been plaguing Efron for the past couple of years, so we know we’re going out on a limb here, but maybe Efron and his bodyguard were after something other than “sushi” (unless that’s some code word for drugs that we’re not aware of).

Ran out of gas?

Efron supposedly ran out of gas, so he and his bodyguard had to seek help. Hmmm. We’re immediately suspicious anytime big Hollywood celebrities are driving themselves around. So that’s weird. But then Efron allegedly ran out of gas? What is he, 14? When was the last time you let your car run out of gas? Exactly.

For the sake of argument, let’s suppose that Efron ran out of gas. He or his bodyguard didn’t have a cell phone to call someone? Again, this isn’t the ’70s. If you get in trouble, you reach into your pocket and call someone. The likelihood of both Efron and his bodyguard either not having a cell phone or both having dead cell phone batteries is slim. Hey, Zac, the next time you get in a pinch, give us a jing jang. We’ll come get you.

POLL: What if this sexy celeb wanted to suck your blood? >>

The bodyguard got shanked but not Efron?

TMZ reports that Efron’s “bodyguard” isn’t a bodyguard at all but a convicted drug dealer. Glad we were sitting down when we got that little piece of shocking news. Once this duo ran out of gas, the “bodyguard” allegedly threw a bottle out of the car, which ticked off some transients who shanked the “bodyguard” in the face, chest and stomach. The story goes that Efron stepped in to save his friend’s life and was punched in the face. So then what? The angered gang of homeless people just shrugged and took off? Why didn’t they shank Efron? Efron’s “bodyguard” heals quickly because law enforcement told TMZ that Zac was the only one bleeding when they got to the scene of the crime.

How did they get help afterward?

So these two had no cell phone, but someone must have called for help after the attack or we have to assume that Efron and his sidekick would still be in a bloody heap in Skid Row. We’re no CSI detectives, but the pieces of this puzzle are ill-fitting at best. Maybe Efron has been in one too many sappy dramas and thinks the public will buy just about anything.