We all know Emma Watson is a good actress, but we didn’t realize how seriously she takes her roles. Watch our interview to find out how she made her childbirth scene so believable. 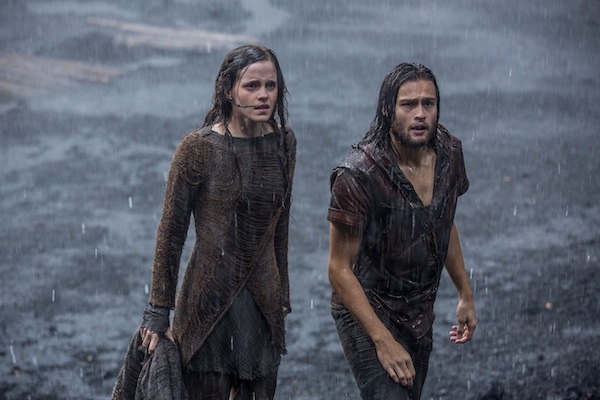 Emma Watson is working hard to get away from her Harry Potter image. She was truly a bada** in last year’s This Is the End, as she brandished a giant ax in high heels.

In her new film, Noah, she plays Ila, the adopted daughter of Noah (Russell Crowe) and wife to Shem (Douglas Booth) — a tricky role, given the intensity of the situation her character is in. The “creator” has sent a giant flood to kill everyone except Noah and his family.

10 Epic things to know about the film Noah >>

To make things worse, Ila is stuck on a giant ark with two of every animal and she’s pregnant. But Watson masterfully steps up to the task. Her performance is truly powerful in this epic and visually-stunning movie.

We sat down with Watson to find out how she prepared for the scene where she had to give birth on the ark. The key to her striking performance was practice.

“My flatmate has horror stories for you,” she said. “She’d come through the doors in the evening and I would be on the ground practicing these insane noises. Contractions make you make these very specific sounds.”

“She was like, ‘This is so weird you’re doing this!’ But I was really obsessive about it. I had this midwife come and we worked together on it and she was actually there during the scene,” said Watson.

So why go to such great pains to get it right? “I see so many births in films, and I’m like, ‘That didn’t look like she just gave birth. She isn’t even sweating! She didn’t break a sweat! This is ridiculous!’ So I wanted it to look authentic.”

Makes sense to us.