Mindy Kaling knows a thing or two about weight that tends to fluctuate. However, when she’s gained a few isn’t the time you’ll find her in loose-fitting clothes. 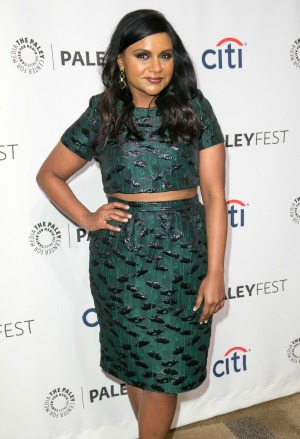 Mindy Kaling may be continually on a quest to lose a few pounds, but don’t make too big of a deal about it. The 34-year-old actress has opened up to Vogue about why skinny just isn’t her goal.

“There’s a whole list of things I would probably change about myself,” Kaling began while being interviewed for the publication’s April issue. “For example, I’m always trying to lose 15 pounds.”

However, she went on to clarify, “I never need to be skinny. I don’t want to be skinny. I’m constantly in a state of self-improvement, but I don’t beat myself up over it.”

Kaling’s red carpet looks tend to change as her figure fluctuates, but not necessarily in the way you might presume.

“When I’m at my thinnest, I tend to wear things that don’t show off my body,” the influential star, who is usually around a size 10, explained. “But when I’m bigger, I’ll go body-con, which comes from a place of ‘This is my perimeter, in case you were wondering if I was actually much bigger.'”

The former The Office actress is determined not to let an obsession with weight or her waistline be the defining factor that dictates her style approach and ability to be bold.

She added, “It’s really tempting not to take chances. But I don’t want to be fearful. I don’t want my tombstone to say, she hid her imperfections well on the red carpet.”

Are you down with Mindy Kaling’s flaunt-your-curves approach? Tell us.

3 hrs ago
by Tabby Kibugi