Cameron Diaz has had her share of good and bad relationships, but has nothing but good things to say about BFF Gwyneth Paltrow and her husband Chris Martin. 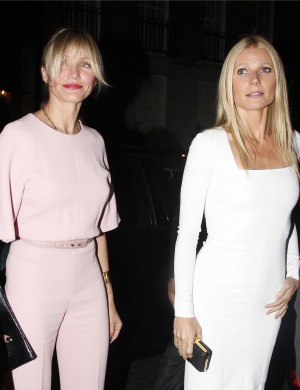 Talk about the most civil breakup ever. The news of Gwyneth Paltrow and Chris Martin’s split was a shock to pretty much everyone, but the couple appears to be handling it well. Paltrow’s friend Cameron Diaz is opening up about the couple and their life together.

“For both Chris and Gwyneth, I mean they worked really hard,” Diaz told E! News. “People want them to blow up and it to be ugly, but they’re kind, generous, loving people who really care about one another. Just because they don’t want to be a couple together doesn’t mean that they have to hate one another. They are really good friends.”

Paltrow and Martin have been married for more than 10 years, and have two children together. It was only two days ago that they announced their “conscious uncoupling” to the world, but only after a lot of thought was put into it.

“They’ve made a conscious effort to separate the part of their lives they don’t want to live together anymore, and maintain a really beautiful, strong bond as parents and as friends,” Diaz explained. “I think people should really honor that and they should admire it and they should respect it. They’ve done something really extraordinary, and they’ve been very brave at presenting that to the public.”

Paltrow and Martin released a joint statement announcing their split, but said they had done everything they could to make it work.

“We have been working hard for well over a year, some of it together, some of it separated, to see what might have been possible between us, and we have come to the conclusion that while we love each other very much we will remain separate,” they said.