She must be a huge fan of the show. Lindsay Lohan gets into total destruction mode over the end of How I Met Your Mother. 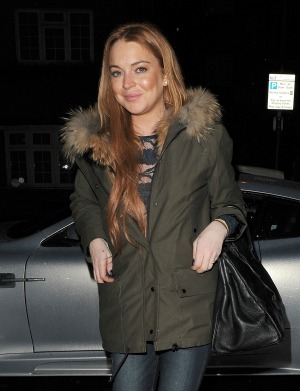 This might be the most unusual tribute ever to the series finale of How I Met Your Mother. Lindsay Lohan appeared on Funny or Die’s Billy on the Street on Wednesday to take out her anger over the CBS sitcom’s conclusion.

In the video, Lohan and comedian Billy Eichner are seen dressed in demolition gear with sledgehammers in front of a How I Met Your Mother-themed station wagon. The clip was shot in a car lot in New York City’s Lower East Side neighborhood.

The hit series ends its run on March 31 after nine seasons and fans are sad to see it end, including the Mean Girls star.

The car was adorned with pictures of the cast and famous phrases from the show. Eichner had each part of the vehicle assigned with “a different dollar value.” At the end of the destruction, the team totaled up the amount to write a check to The Big Bang Theory‘s Mayim Bialik because she’s on “a show that is not ending, just to spite the cast of How I Met Your Mother,” said Eichner.

The funnyman began with a wallop to Neil Patrick Harris’ face.

He shouted, “Neil Patrick Harris, take that, you awards-show a**hole.”

Lohan was given some choice one-liners in the video, including:

“I should have done this to Herbie Fully Loaded when he abandoned me!”

“F*** you, Jason Segel, I’m tired of seeing your penis in every movie!”

And the concluding statement, “I’ve worked with Lily Tomlin!”

Luckily for Bialik, she is getting a $500 check with the word “spite” in the memo line. Hopefully, Lohan and Eichner recover from their anger soon.