Kim Kardashian and Kanye West’s Vogue photoshoot makes the couple look perfect, but apparently they had some normal baby issues along the way. 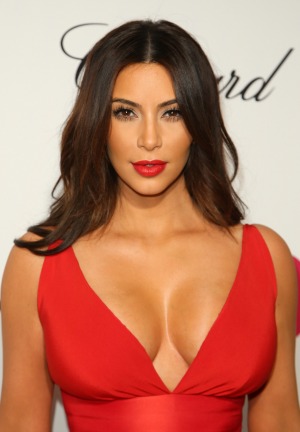 Kim Kardashian is over the moon that she was finally given the opportunity to appear on the cover of Vogue, but things aren’t always as they seem.

Love lessons we can all learn from Kimye (yes, we’re going there) >>

The reality star and her fiancé, Kanye West, appear in the magazine, along with their daughter, North West. Kardashian joined Seth Meyers on Late Night to talk about her excitement over the honor and the things that went wrong on the set — like their daughter having an accident on Kanye.

“North peed on him right at that moment and he was trying to tell me and I couldn’t really hear him,” she said. “I had to get up and clean her off, clean him off. It’s a good memory.”

But even with the normal baby issues on the set, Kardashian said being on the cover of Vogue is her “biggest dream come true” and she couldn’t stop gushing about the opportunity. She even compared herself to Carrie Bradshaw in the Sex and the City movie.

Kardashian also knows how important their cover was, and is glad they got to break barriers.

Not everyone was happy with Kardashian and West’s cover, including Naomi Campbell and Sarah Michelle Gellar. After news of the couple’s cover, Gellar tweeted, “Well……I guess I’m canceling my Vogue subscription. Who is with me???” But the criticisms seem few and far between.