Trace Adkins and his wife are calling it quits after almost two decades of marriage. Life has been rough on the country singer lately. 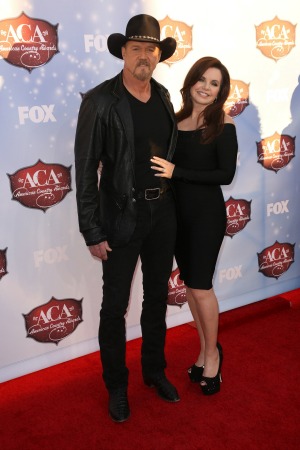 It’s the end of the road for Trace Adkins and his wife, Rhonda, who filed for divorce this week in Tennessee. The couple has been married for 17 years.

According to TMZ, the separation occurred on Monday. The couple married in 1997 and have three daughters who are 16, 12 and 9 years old. Rhonda has asked for primary residential custody of the girls along with child support, alimony and being named the sole beneficiary of Trace’s life insurance policy.

Robin Thicke: Paula Patton and I are both very happy >>

Trace has had a rough year so far. He entered rehab in January after he got into an argument with a Trace Adkins impersonator on a cruise ship near Jamaica. That altercation led him to rehab once the ship reached land.

At the time his rep said to People, “Trace has entered a treatment facility after a setback in his battle with alcoholism. As he faces these issues head-on, we ask that his family’s privacy will be respected.”

It’s unclear whether his addiction issues were a reason for the divorce, but he has struggled with alcoholism for decades. This is Trace’s third marriage. He also has two daughters from his first marriage.

Trace and Rhonda made headlines back in 2011 when their home and all of their belongings were lost in a fire. Fortunately, the nanny, their daughters and the family dog all made it to safety.

Trace is set to hit the road this summer. His first stop is in Sayreville, New Jersey, on June 5.